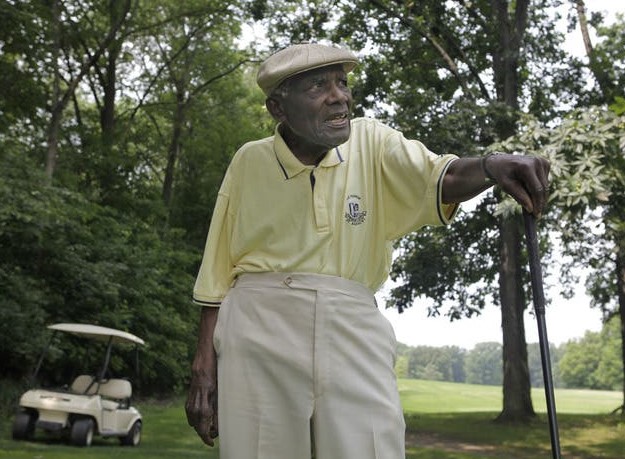 Bill Powell was the first African American to design, construct, and own a professional golf course in the United States. In 1946, Bill and his wife Marcella did most of the landscaping by hand when they transformed a 78-acre dairy farm to a nine-hole golf course located near East Canton, Ohio.

William James “Bill” Powell was born on November 16, 1922, in Greenville, Alabama, but grew up in Minerva, Ohio. Powell worked as a caddy as a youth. Then, after high school, he played golf on the Wilberforce University team before serving in World War II with the U.S. Army Air Forces.

In 1946, after Powell returned home from the war, the segregationist policies of the time prevented him from golfing on a public golf course in Ohio, so he decided to build his own course. He was denied a G.I. loan but was able to get financial support from his brother and two African American physicians and bought a dairy farm outside East Canton so he could open a golf course that would welcome players of all races.

In 1978, the Clearview Golf Club was expanded from nine to 18 holes and was used by thousands of people each year. In 1996, Powell was inducted into the National Black Golf Hall of Fame because of his pioneering effort with the Clearview Golf Club. Five years later, the Department of the Interior designated Clearview as a National Historic Site. The second generation of the Powell family now runs the Club. Bill’s son, Larry, is the course superintendent and has been recognized by the Golf Course Superintendent’s Association. Bill’s daughter, Renee, is Clearview’s Head Golf Pro.  Renee was the second African American woman to play for the Ladies Professional Golf Association, after Althea Gibson. In 1992, the Powells received the Jack Nicklaus Golf Family of the Year Award from the National Golf Foundation.

In 2009, Bill Powell received the highest honor bestowed by the Professional Golfers’ Association of America when he was presented with the Distinguished Service Award. In his acceptance speech, Powell explained why he had built the Clearview Golf Club, saying, “I did not want other people who wanted to play the game of golf to have to suffer the indignities that I had.” William “Bill” Powell died on December 31, 2009 in East Canton, Ohio. He was 93.