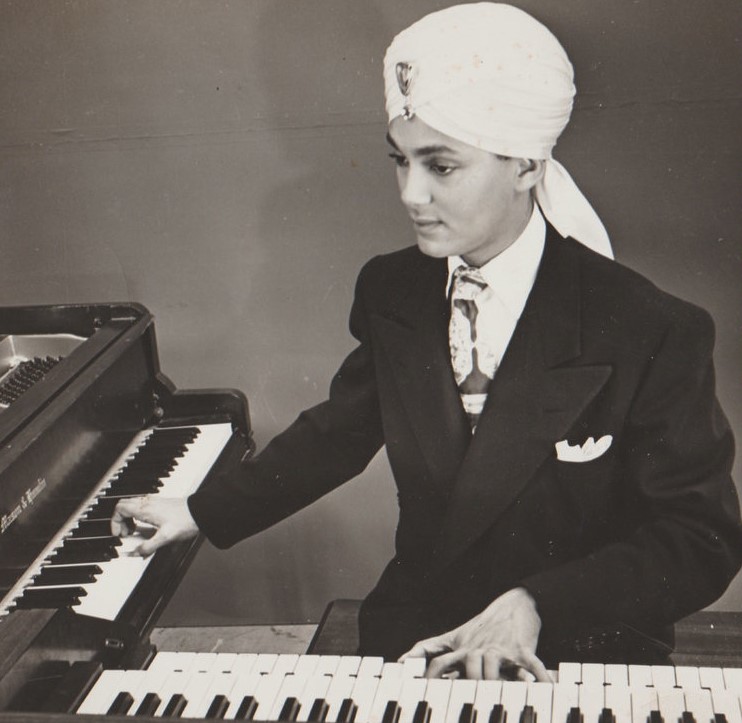 Korla Pandit, the first African American to have his own television show, was a composer, organist and pianist who starred in TV’s first all-music series.  He was known as the godfather of “Exotica,” a musical genre that became popular in the 1950s.  In order to garner the kind of success which would have been inaccessible had he simply played himself, in 1939 he became Juan Rolando, a man of Mexican heritage, and in 1948 he became Korla Pandit, a Brahmin Indian.

Pandit, one of seven children, was born John Roland Redd on September 16, 1921 in St. Louis, Missouri, to Doshia O’Nina Johnson Redd and Rev. Ernest S. Redd, Sr., a Baptist minister.  The Redd family moved to Hannibal, Missouri, before John Roland was a year old, and by the time he was two his musical skills were evident.  From 1931 the Redd family lived in Columbia, Missouri.  Shortly after high school in 1938 John Roland got his first job in radio with Central Broadcasting Company in Des Moines, Iowa.

The next year Roland moved to Los Angeles, where his sister Frances Redd lived.  That year Frances starred in the 1939 all-black-cast film, Midnight Shadow, where an outfit worn by “Prince Alihabad,” played by actor John Criner, inspired John Roland to wear his trademark turban-and-oval-jewel ensemble.  In the 1940s, billing himself as “Juan Rolando – The One-Man Combo,” he played in small night clubs and cabarets in the Los Angeles area.  Juan Rolando also aired on radio station KMPC, and on Jubilee, an Armed Forces Radio Service show that specialized in playing black jazz and swing band music aimed at African American military personnel overseas during World War II.

In 1943 Rolando fell in love with a white woman, Beryl DeBeeson, a Disney animator.  The couple got married in Tijuana, Mexico, on July 21, 1944, as mixed marriages were still not allowed in California at that time.  They had two sons.

Juan Rolando became Korla Pandit on June 28, 1948, on a radio show called Chandu the Magician.  In February 1949 Korla Pandit’s Adventures In Music debuted on television station KTLA in Los Angeles, where Pandit played the organ and piano, sometimes simultaneously.  The handsome young man in the turban didn’t speak, only gazed dreamily into the camera, an effect that proved mesmerizing as Pandit became an overnight sensation.

By 1951 Pandit had a national audience, producing some of the world’s first music videos known as “telescriptions.”  Contractual problems followed that resulted in replacing Pandit with the up-and-coming pianist, Liberace, in 1953.  Pandit then did a hugely popular show with KGO in San Francisco.

In the 1970s, Pandit, no longer on television, continued to record and perform for fans and play the organ at silent movie revival houses.  He also made a few movie appearances, the most prominent of which was in the 1994 Tim Burton film Ed Wood.  Pandit last performed in Los Angeles in February 1997.