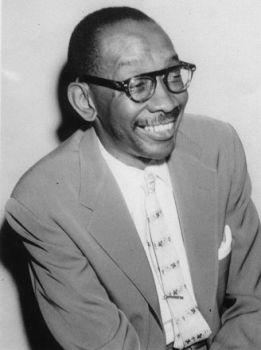 Ted Poston, the first African American journalist to work at a mainstream newspaper, was born on July 4, 1906, in Hopkinsville, Kentucky.  His mother, Mollie Cox, died when he was ten and he was raised mostly by his eight older siblings, while his father, Ephraim, taught at the Kentucky State Industrial College for Negroes (now Kentucky State University) in Frankfurt, over two hundred miles away.  By the age of fifteen, Poston had begun his career writing articles for his family’s paper, the Hopkinsville Contender.  He graduated from Tennessee Agricultural and Industrial College (now Tennessee State University) in 1928 and moved to New York to pursue a career in journalism.

Poston became a reporter for the Amsterdam News in Harlem in 1928.  By 1935 he became editor of the paper.  Shortly after his promotion Poston led an attempt to unionize his fellow reporters and instigated a strike.  He was fired because of his activities.  Following his dismissal, he held a series of odd jobs until he was temporarily hired by the New York Post in 1936, making him only the third African American to be hired as a reporter for a major New York City daily paper.

Ted Poston would remain with the New York Post for the next thirty five years.  During that time he also engaged in “race work,” the effort to improve the lives of African Americans.   In 1940, Poston became part of the famed “black cabinet,” an informal group of African American policy advisors to President Franklin Roosevelt.

As head of the Negro News desk in the Office of War Information, Poston provided vital information to black newspapers across the nation in the campaign to integrate the defense industry workforce.   His efforts were partly responsible for Executive Order 8802 in June 1941 which banned racial discrimination in companies with government contracts.

After World War II, Poston wrote serialized short stories for various newspapers.  Most of these stories addressed issues of social justice and racial discrimination.  He wrote a series on a 1949 rape trial of a group of young black men in Florida which he called “Horror in the Sunny South.”  The series received the George Polk Award for national reporting in 1949.  Fifty years later in 1999, the series was selected by a New York University panel of Journalism professors as one of the top one hundred works of American journalism in the 20th century.

Ted Poston married three times, to Miriam Rivers in 1935, Marie Byrd Jackson in 1941, and, for the last time in 1957 to Ersa Hines Clinton.  His third wife became a leading official in the administration of New York Governor Nelson Rockefeller.

In 1972 Poston retired from the New York Post, ending a forty-six-year career in journalism.  He died in 1974 in New York City and was buried in his hometown of Hopkinsville. He was sixty-seven years old.