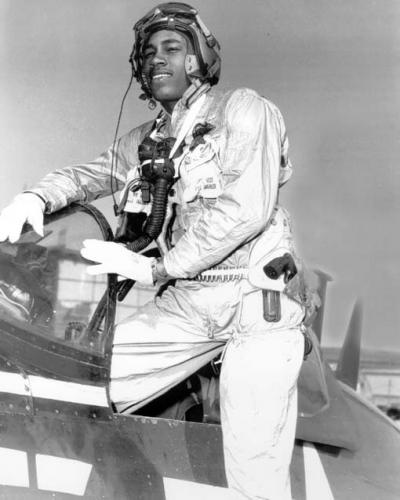 Lieutenant General Frank E. Petersen Jr., the first black general in the U.S. Marine Corps, was born in 1932 in Topeka, Kansas. He earned his Bachelor of Science in 1967. He received a Master’s in International Affairs in 1973. Both degrees came from George Washington University in Washington, D.C. He also attended the Amphibious Warfare School in Quantico, Virginia and the National War College in Washington, D.C.

Frank Petersen joined the Navy as an electronics technician in 1952. Motivated by the story of Jesse Brown, the first African American naval aviator who was shot down and killed over North Korea, Petersen applied for and was accepted into the Naval Aviation Cadet Corps. In 1952 Petersen completed his training with the Corps and was commissioned as a second lieutenant in the Marine Corps.  He became the first black pilot in the Marine Corps.

Petersen served as a fighter pilot in both the Korean and Vietnam Wars. In 1953 he flew sixty-four combat missions in Korea and earned six air medals as well as the Distinguished Flying Cross. In 1968, while serving in Vietnam, he became the first African American in the Marines or the Navy to command a tactical air squadron. He flew nearly 300 missions during the Vietnam War. In 1968, General Petersen earned the Purple Heart for his actions while flying a mission in North Vietnam.

Gen. Petersen served thirty-eight years in the Navy, including thirty-six as a Marine. He retired as a lieutenant general in 1988. At the time of his retirement, Gen. Petersen had earned twenty medals for bravery in combat. He was also the senior ranking pilot in the Marine Corps and Navy from 1985 to 1988. General Petersen worked with several education and research organizations during and after his time in the military. These include the Tuskegee Airmen headquarters and the National Aviation Research and Education Foundation. He was also vice president of Dupont Aviation.

Gen. Frank E. Petersen died on August 25, 2015 at his home in Stevensville, Maryland of complications from lung cancer.  He was 83.