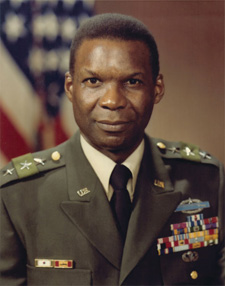 Lieutenant General Julius Wesley Becton Jr. was born on June 29, 1926 to Julius and Rose Becton in Bryn Mawr, Pennsylvania. His father worked as a janitor in their apartment building. His mother was a housekeeper and laundress. In December 1943, Julius Becton joined the Army Air Corps Enlisted Reserves. After graduating high school in 1944, Becton joined the active army. It was Becton’s hope that he would become a pilot but was ruled ineligible because of astigmatism.

Though the Army was segregated in 1944, Officer Candidate School was not. Julius Becton and sixteen other African American candidates completed OCS in 1945 and were commissioned as second lieutenants. Shortly after his commissioning, Lt. Becton was assigned to serve in the Philippines.

Upon his return from the Philippines, Becton left the army and attended Muhlenberg College in Allentown, Pennsylvania. In 1948, after President Harry S. Truman had desegregated the military, Becton was accepted for active duty once again and remained in the Army until 1983.  During that period he saw combat duty in Korea and Vietnam. He was also stationed in Germany, the Philippines, France, the Southwest Pacific, and Japan during his service.  Steadily moving up the ranks, in 1972 Becton was promoted to Brigadier General.

As an army General he commanded the 1st Cavalry Division, the United States Army Operations Test and Evaluation Agency, and the VII U.S. Corps.  With that appointment in 1978, General Becton was the first African American officer to command a Corps in the U.S. Army.

In 1960, Becton earned a Bachelor’s degree in mathematics from Prairie View A&M in Texas. He received a Master’s in economics from the University of Maryland in 1967. He is also a graduate of the United States Command and General Staff College, the Armed Forces Staff College, and the National War College.

After retiring as a Lieutenant General in 1983, Gen. Becton held several important posts in the U.S. government, the private sector, and the North Atlantic Treaty Organization (NATO).  From January 1984 to October 1985 he was director of the Office of U.S. Foreign Disaster Assistance.  President Ronald Reagan appointed him the director of the Federal Emergency Management Agency (FEMA), a post he held between 1985 and 1989.  Becton later was Chief Operating Officer (CEO) of American Coastal Industries and he was named chairman of the Senior Civil Emergency Planning Committee for NATO.

In 1989 the Texas A&M University Board of Regents unanimously voted Gen. Becton the president of Prairie View A&M, the university from which he earned his Bachelor’s degree in 1960.  Becton, who remained in this position until 1994, was the first Prairie View A&M graduate to be selected president of the institution.  Between 1996 and 1998 General Becton was Superintendent of Schools in Washington, D.C.

Gen. Becton married Louise Thornton on January 29, 1948. They have five children together.