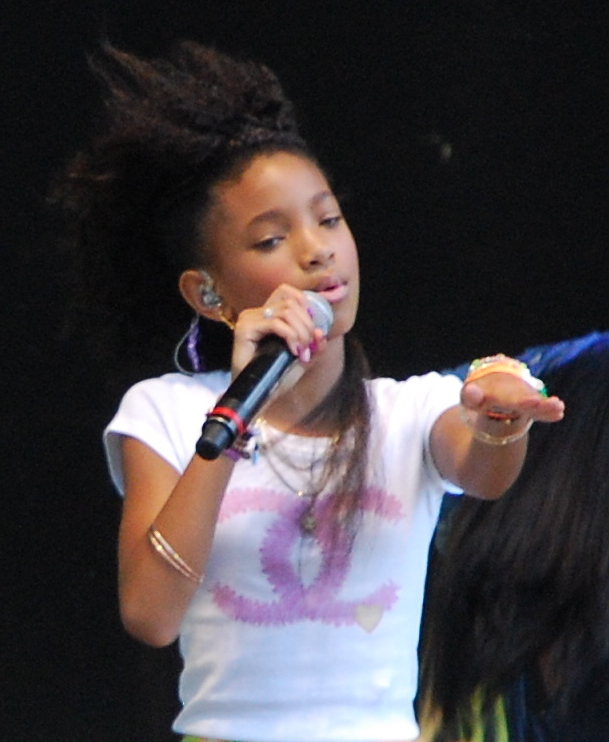 Willow’s background and upbringing has always been in the public’s eye due to the work and popularity of her parents. At age six Willow played Marley, the on-screen daughter of her father, Will Smith’s character, Robert Neville, in the film I Am Legend (2007). In 2008 Willow played Countee Garby in the movie Kit Kittredge: An American Girl. In October 2010, when Willow was not yet ten-years-old, she became a recording artist when her debut single, “Whip My Hair,” written by Ronald Jackson and Janae Luann Ratliff, was released on the Roc Nation record label. At the time of her signing with the label, founded by Shawn Carter who is best known as Jay Z, she became the youngest artist on the label. The song’s online premiere was hosted by Vevo while its TV premier came when she was a guest star on the series 106 & Park.

Willow described in a 2010 Billboard interview how the song was inspired. “When I made ‘Whip My Hair,’ I didn’t really know it was an important thing because I was just expressing my joy. I was expressing myself.” She was responding to the fact that “Whip My Hair” had become a song of empowerment to many young women who often faced the challenge of styling their hair.

The song became a popular smash hit, peaking at no. 5 on the Billboard R&B/Hip-Hop chart and no. 11 on the Billboard Hot 100. It also peaked at no 2 in the United Kingdom, making her debut single an international hit. Whip My Hair was nominated for Video of the Year and Young Stars Award at the 2011 BET Awards and Outstanding Music Video at the NAACP Image Awards. It also won the Coca-Cola Viewer’s Choice Award in 2011.

Willow now co-hosts with her mom, Jada Pinkett Smith, “Red Table Talk” on the social media network Meta (also known as Facebook). That program has earned her a NAACP Image Award and Daytime Emmy Award nominations. She was also declared Entertainer of the Year at EBONY Power 100 Awards October 23, 2021, along with Jada Pinkett Smith (her mother), and Adrienne Banfield Norris (her grandmother) for Red Table Talk. In 2021 she was named one of the 100 Most Influential People in the World, and Billboard’s Greatest Pop Stars of 2021. She has also earned a place on the 2022 Forbes 30 Under 30 list.