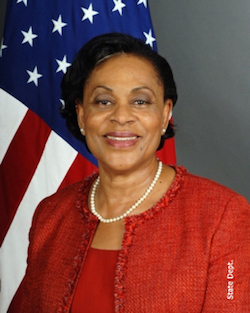 Ambassador Sue Katherine Brown is a career member of the Senior Foreign Service with the rank of Minister Counselor.  In 2011 President Barack Obama nominated her to become the U.S. Ambassador to Montenegro, the first African American to hold this post and only the second U.S. ambassador since Montenegro declared its independence from Serbia on June 3, 2006.  Brown’s nomination was confirmed by the U.S. Senate and she presented her credentials to the President of Montenegro, Filip Vujanović, on Thursday, May 12, 2011.

A native of Houston, Texas, Brown joined the U.S. Foreign Service in 1980.  Ambassador Brown worked in various capacities at the U.S. State Department between 1980 and her ambassadorial appointment in 2011. Her other overseas postings include France, Liberia, Kenya, Nigeria, and Côte d’Ivoire.  Additionally while she served in Indonesia she helped coordinate U.S. aid efforts in response to severe flooding on some of the nation’s islands.

Ambassador Brown also served as Deputy Chief of Mission at the U.S. Embassies in Accra, Ghana and Asmara, Eritrea.  While serving in Accra, Ghana as Embassy Chargé d’Affaires (second in command) from 2006 to 2009, she was credited with leading a public service campaign that saved a number of young Ghanaian girls from sex trafficking.

In 2009 she became office director for Southern African Affairs in the Bureau of African Affairs at the State Department. She held this post until receiving her ambassador assignment.

While serving as ambassador Brown oversaw U.S. assistance efforts in response to two natural disasters.  In February 2012 she coordinated with the government of Montenegro, the work of the 361st Civil Affairs Brigade and the 12th Combat Aviation Brigade in Podgorica, Montenegro.  These soldiers were part of a larger U.S. task force providing humanitarian assistance at the request of the government of Montenegro after record snowfalls left tens of thousands in the country’s mountainous north cut off and unable to receive food, fuel, or medical assistance.

Two years later she played a similar role with a U.S. Military medical evacuation by Blackhawk helicopters in Podgorica in February 2014.  The American helicopters were sent to deliver critical supplies and provide rescue services to those Montenegrins stranded in the areas most heavily hit by a recent snowfall.

During her time as U.S. Ambassador in Montenegro, Brown was instrumental in advising and assisting the government with its progress toward integrating into the European Union (EU) and the North Atlantic Treaty Organization (NATO).

Ms. Brown has been the recipient of superior and meritorious honor awards and has also been recognized for her strong leadership and management skills. Ms. Brown’s foreign languages include French and Bahasa Indonesian.

Ambassador Sue K. Brown retired from the U.S. Foreign Service in 2015.  She is the mother of five children.