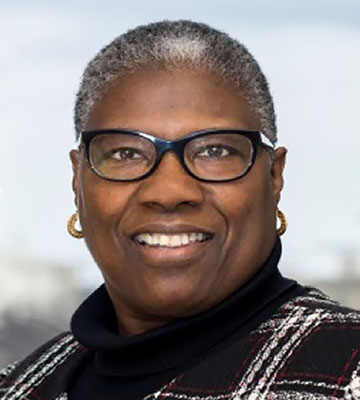 The Rev. Dr. Regena Lynn Thomas is a former politician who formerly held the office of secretary of state for New Jersey and is the director of the Human Rights and Community Relations Department of the American Federation of Teachers (AFT). Thomas was born and raised in Clinton, Kentucky, and attended local schools, graduating from high school in 1975. She then attended Morehead State University, in Morehead, Kentucky, and graduated with her B.A. in universal studies in 1979.

Thomas started her political career shortly after graduation when she began working for the Legislative Research Commission (LRC), under the Hon. Georgia Davis Powers, the first African American and at the time the only woman serving in the Kentucky State Senate. She relocated to Washington, D.C., and began working with the Rev. Jesse Jackson and the National Rainbow Coalition where she was a grassroots campaign organizer for his 1984 and 1988 presidential campaigns. Thomas also worked with District of Columbia Mayors Marion Barry and Sharon Platt during their political campaigns. She remained with the Rev. Jackson for 12 years, working with the PUSH coalition and various other commissions.

From 1997 to 2007 Thomas worked for the Democratic National Committee (DNC) as a base vote director. Additionally, as a political consultant she served on the Democratic Senatorial Committee specializing in African American voter turnout. Her outstanding work caught the eye of New Jersey Gov. James McGreevy, who appointed Thomas secretary of state of New Jersey after his 2001 election. Thomas was responsible for cultural affairs, minority affairs, literacy, state history and record keeping, volunteerism, and upkeep of the state archives.

Thomas held the position of secretary of state from 2002 to 2006 before accepting the call into ministry. She then attended New Brunswick Theological Seminary, in New Brunswick, New Jersey, and graduated in 2008 with a master’s degree in divinity. She was ordained into the African Methodist Episcopal Church and began ministering at Grant Chapel African Methodist Episcopal Church in Trenton, New Jersey. Thomas continued her work in the political field as deputy campaign manager for the National Education Association from 2008 to 2009.

In 2014, Thomas was promoted to the director of community engagement for the Democratic National Committee and continued her role as political department senior adviser. Thomas earned her doctorate in. urban ministry from Wesley Theological Seminary in Washington, D.C., in 2015, and began working for the American Federation of Teachers as the Women, Human & Civil Rights Advocacy director. She currently serves as executive minister for Grant Chapel AME Church.