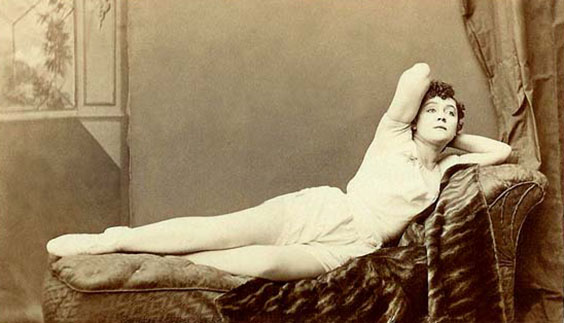 Adah Isaacs Menken was an American actor and poet who performed in New York, San Francisco, London, and Paris and was widely known for her title role in the play Mazeppa, or the Wild Horse of the Tartary. She also wrote poems for magazines and newspapers, and a book of her poems was published shortly after her death.

Menken was born on June 15, 1835, in New Orleans to Auguste Theodore, a free man of color, and Magdaleine Jean Louis Janneaux, a French Creole mother. It is evident from her later writings and career that she received an extensive liberal education in literature and languages. Adah married Nelson Kneass in Galveston, Texas, in 1855, the first of five husbands. Kneass was a Philadelphia-born composer and opera impresario. Although there is no record of a divorce, in 1856 she married Alexander Isaac Menken, the son of a successful Cincinnati dry goods dealer, in Livingston, Texas. She worked as an actress in Louisiana and Texas, then she and her husband relocated to Cincinnati, where she presented herself to his family as Jewish from birth. While in Cincinnati she published numerous poems in local Jewish newspapers, several of which were discovered at the time to have been plagiarized from a Jewish poet in Charleston, South Carolina.

After obtaining a divorce in 1859, Menken relocated to New York, where she married boxer John Carmel Heenan. The following year, Heenan abandoned Menken when he moved to London, and Menken’s infant son died. Remaining in New York, Menken became part of literary circle that included Walt Whitman. She published poems in 1860 and 1861 in the Sunday Mercury, and then married its literary editor, Robert Henry Newell, in 1862.

In 1862 Menken performed Mazeppa, a play based on an 1819 Lord Byron poem, for the first time in Albany, New York. The sensational role, previously portrayed on stage only by men, involved her wearing men’s clothes, engaging in a sword fight, being stripped of clothes, beaten, and tied to a horse that then climbed an on-stage mountain.

In 1863 Menken and Newell relocated to San Francisco and she performed Mazeppa in California and Nevada, becoming the most highly paid actress of her time, and meeting a new circle of literary friends that included Mark Twain. In 1864, Menken traveled to London, again performing in Mazeppa. She began hosting literary salons with celebrated writers including Charles Dickens. In 1866 she married Capt. James Barkley, a gambler and financier, and they relocated to Paris. Menken gave birth to a son, who died in the summer of 1867. In Paris, Menken again became a stage celebrity, socializing with writers George Sand and Alexander Dumas, and was romantically linked with each of them.

Menken became ill in May 1868 while working on a book of poems. She died on August 18, 1868, at the age of 33. After her death she was buried in the Jewish section of a Paris cemetery. The following week her book of poems, Infelicia, was published, dedicated to Charles Dickens. It remained in print until 1902. Her poems touched on a variety of themes, from spirituality to love, despair, social conventions, and the roles of women.