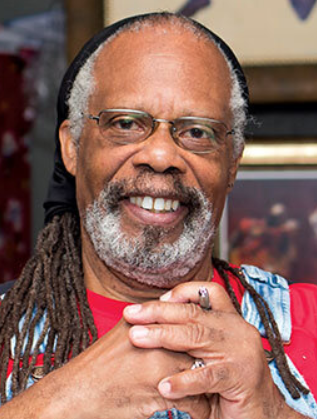 Paul Goodnight is a talented painter and ceramist known for his works on hit television series. Born in Chicago on December 31, 1946, Goodnight’s father abandoned him and his mother, a social worker, at a very early age. They moved to New London, Connecticut and then to Boston, Massachusetts where he became the foster child of James Lockett, a policeman, and his wife, Essie. He encountered problems adjusting to school and often engaged in truancy, but he developed a passion of art. After completing high school, he was drafted into the military, serving two years in the Army during the Vietnam War. He observed firsthand the unspeakable horrors of the bloody conflict that traumatized him. The trauma affected him so that he was unable to speak which lead to drug abuse. When he returned to Boston, Goodnight retreated to painting because it gave the greatest comfort and fulfillment. He soon enrolled in Vesper George School of Art and Roxbury Community College. After completion in 1976, he was awarded a bachelor’s degree at the Massachusetts College of Art.

While developing his personal style and tastes, Goodnight was influenced by, among others, local African American artists such as Paul Rahilly, his painting instructor as well as Allan Rohan Crite, Gary Rickson, and Dana Chandler. During the day, Goodnight taught at a middle school as well as area high schools. He also taught inmates at Bridgewater State Prison. His big break came in 1984 when his painting titled Cousins by the Dozens appeared on the set of the popular television sitcom The Cosby Show. Subsequently, his works were used on the sets of the television series Living Single, Seinfeld, The Hughleys, ER, The Fresh Prince of Bel-Air, Family Matters, and the hit 1990 motion picture Ghost.

For the 1996 Olympics in Atlanta, Goodnight was commissioned to paint the official commemorative poster titled “Feet Don’t Fail Me Now.” Twelve years later, he painted the commemorative triathlon triptych for the 2008 Olympic Games in Beijing. His other artworks have appeared on such publications as Essence, People Magazine, The Boston Globe, Architectural Digest, Décor, and Ebony. Celebrities such as South African Bishop Desmond Tutu, poet-author Maya Angelou, Isiah Thomas, and actors Samuel L. Jackson, Angela Bassett, and Wesley Snipes have also purchased his paintings for their private collections. Goodnight, who is also expert in a variety of media including pastels, acrylics, and mixed media, created an album cover for the R&B band Kool & the Gang. He also painted a stained glass for Ebenezer Baptist Church in Atlanta, Georgia and a ceramic mural at the entrance of the Orlando (Florida) Airport.

Goodnight studied and lived in several countries in Europe, Asia, Africa, and throughout the Americas. He used vibrant colors and near-abstraction to infuse not only emotion but also the universal humanity of his subjects who are invariably African or African American. His paintings have been exhibited at the Smithsonian in Washington, D.C., Boston’s Museum of Fine Arts, and The Schomburg Center in New York City. In 1991 he and his wife, Bernice Robinson, co-founded Color Circle Art Publishing in Boston where they reside along with their daughter, Aziza Robinson-Goodnight, a high school art teacher.