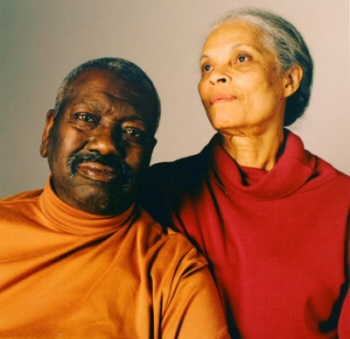 Jacob Lawrence, born in 1917 in Atlantic City, N.J., moved to New York City at age thirteen.  Gwendolyn Knight, born in 1913, in Barbados, West Indies, arrived in the U.S. at age seven, and spent her first years in St. Louis.  She arrived in New York City on the threshold of her teens.  Knight and Lawrence met in the mid 1930s in Charles Alston’s Harlem Community Art Center, a place where young artists found mentors and a compatible working space.  During the late 1930s Jacob and Gwen worked with artist/ sculptor Augusta Savage. The sculptor played a key role in bringing Jacob Lawrence and Gwen into the WPA program which established their lives as professional artists.  In 1940 Jacob Lawrence was awarded a Julius Rosenwald Fellowship to complete his Migration of the Negro Series.  Gwen continued to work with Augusta Savage but she also devoted time to help Jacob prepare the boards (for the Migration Series) in his studio at 33 West 125th street, an unheated space he shared with a number of artists including painter Romare Beardon and writer Claude McKay.

The Migration of the Negro Series became one of Jacob Lawrence’s most beloved series. It launched his career and secured his place in art history.  Lawrence and Knight were married in 1941.  They lived most of their lives in New York where Jacob painted and taught, although the couple took a seminal trip to Nigeria in 1964.  In 1971, when the University of Washington offered a tenured teaching position, they moved to Seattle.  Jacob retired as professor emeritus in 1983.  He remains one of America’s most celebrated painters.