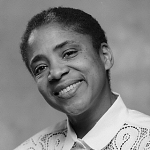 Barbara Earl Thomas is a Seattle based painter and writer received her B.A. and M.F.A. from the University of Washington in 1974 and 1977, respectively, with minors in French and Art History. She is represented by the Francine Seders Gallery. In 1998 & 2000 she received The Seattle Arts Commission award for new non-fiction. Her essays have appeared in journals, and anthologies, including Intimate Nature: The Bonds Between Women and Animals, The Gift of Birds: True Encounters with Avian Spirits. Principal essays appear in Never Late for Heaven: The Art of Gwen Knight, 2003 and Storm Watch: The Art of Barbara Earl Thomas (Seattle: University of Washington Press, 1998).

Jacob Lawrence, born in 1917 in Atlantic City, N.J., moved to New York City at age thirteen.  Gwendolyn Knight, born in 1913, in Barbados, West Indies, arrived in the U.S. at age seven, and spent her first years in St. Louis.  She arrived in New … END_OF_DOCUMENT_TOKEN_TO_BE_REPLACED