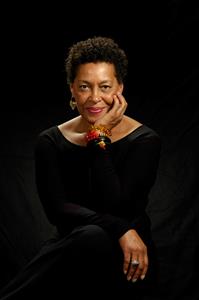 Weems was born in Portland, Oregon on April 20, 1953, to Carrie Polk and Mrylie Weems. In her youth, she was involved in dance and street theater. Weems gave birth to her daughter Faith in 1969, and shortly thereafter she relocated to San Francisco, California to study dance at a private school. She was given a camera as a gift, and was inspired by the works she saw in The Black Photography Annual, a book of images by African American photographers. In 1976, Weems took a photography class at the Studio Museum in Harlem. She then began to live bi-coastally and returned to San Francisco, where she enrolled into the California Institute of the Arts, Valencia, graduating in 1981 with a B.A. She received an MFA from the University of California, San Diego, and participated in the folklore graduate program at the University of California, Berkeley.

Weems first collection of photographs, spoken word, and text called Family Pictures and Stories was published in 1983. Her next series, Ain’t Jokin (1988), focused on racial jokes and internalized racism. American Icons (1989) also focused on racism. She has since created a plethora of books tackling numerous issues, and her most recent project Grace Notes: Reflections for Now, explores the role of grace in the pursuit of democracy.

Throughout her three-decade career, Weems has been an artist in residence and visiting professor at numerous locations. She has been recognized by several institutions and awarded multiple honorary degrees. In January of 2014, a 30-year retrospective of Weems works was featured at the Solomon R. Guggenheim Museum in New York, marking the first solo exhibition featured at the museum by an African American woman. Her works have also been featured in The Frist Center for Visual Arts, The Metropolitan Museum of Art, The Museum of Fine Arts in Houston, The Cleveland Museum of Art, The Tate Museum in London, The Minneapolis Museum of Art, and the Centro Andaluz de Arte Contemporaneo in Spain.

Her list of awards includes The Tiffany Award, The Anonymous Was A Woman Award, and The National Endowment of the Arts, and the BET Honors Visual Artist Award. Weems was also presented with one of the first U.S. State Department Medal of Arts Awards in 2012.

On February 1, 2020, Weems became the University Artist in Residence, a first time position at Syracuse University. Previously, she was artist in residence at the Park Avenue Armory, Light Work (1988) and the College of Visual and Performing Arts (2005-2006) both in New York City. She currently lives in New York with her husband, Jeffrey Hoone.