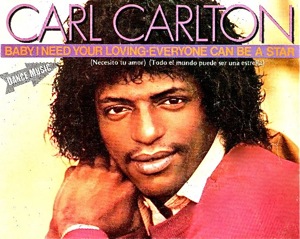 Rhythm and blues singer and lyricist Carlton “Carl” Carlton was born on May 21, 1953, in Detroit, Michigan, and began performing as a musician at the age of 10. He was called “Little Carl” Carlton. His first recordings at 11 years old in 1964 were for Lando Records, which released “I Think of How I Love Her” and “I Love True Love.” In 1965, he recorded some Detroit area hits, including “So What” and “Don’t You Need a Boy Like Me.”

In 1968, Carlton signed with the BackBeat Record label in Houston, Texas, where he released his first single on that label, “Competition Ain’t Nothing,” which only reached no. 36 on the Billboard R&B chart but became a huge hit in Great Britain. Carlton graduated from Murray Wright High School in Detroit in 1970.

Due to conflicts over royalties from both the BackBeat Record label, which was sold to ABC Records in 1973, and ABC, Carlton did not record from 1975 to 1977. He signed with Mercury Records in 1977 and released one single, “Something’s Wrong,” on that label which was only modestly successful.

In 1981, Carlton released the album Carl Carlton with 20th Century Fox. This was his first album that went gold (selling more than 500,000 units). The album including the single “She’s a Bad Mama Jama” which rose to no. 2 on the Billboard R&B chart and remained charted for eight weeks. It also peaked at no. 34 on the U.K. Singles chart. In 1982 Carleton was nominated for Best R&B Vocal Performance, Male, at the 24th Grammy Awards show in Los Angeles. In 1983 Carlton released the album The Bad C.C. (RCA Victor) and in 1985 he came out with the single “Private Property” on the Casablanca label.

In 1994, Carlton released the album Main Event. However, it went unnoticed and did not chart. Eight years later, in 2002, Carlton appeared on the “Rhythm, Love, and Soul” edition of the PBS series American Soundtrack. This masterpiece exhibition includes numerous legendary artists such as Aretha Franklin, Lou Rawls, the Three Degrees, Billy Paul, and The Manhattans.

In 2010, Carlton released his first gospel single, “God Is Good.” The following year, 2011, he was nominated for a Detroit Music Award in the “Outstanding Gospel/Christian Vocalist” category at The Fillmore Detroit theater.

In 2019, Carl Carlton was hospitalized in Detroit, Michigan, after suffering a mild stroke. The New York Times Magazine listed Carlton among hundreds of artists whose material was reportedly destroyed in the 2008 Universal Studios fire.