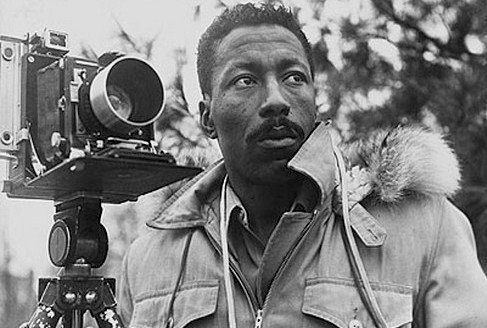 On November 30, 1912, in Fort Scott, Kansas, Sarah and Andrew Parks welcomed their fifteenth child, Gordon Roger Alexander Buchanan Parks, into their home. Though struggling against poverty and racism in Fort Scott, young Gordon was nurtured there. His mother was especially influential, and her early lessons sustained him throughout his remarkable life. Because of Parks’s vast intellectual and artistic accomplishments, he was described as a “Renaissance man.” He accomplished many firsts, including the distinction of being the first black photographer at Vogue, Glamour, and Life magazines. He worked at Life for nearly 25 years and completed over 300 assignments. He was a documentary and fashion photographer; a film director, writer, producer; a poet, novelist, essayist; and a composer. Among his notable films are Shaft and The Learning Tree.

Though largely self-taught, he received over fifty honorary doctorates. Parks’s life was a paradox: he was as comfortable modeling a Brooks Brothers suit in New York as he was wearing his western hat and cowboy boots on the Kansas prairie. He moved with the same ease in the modest Washington, D.C. home of Ella Watson, African American charwoman whose image became the famous American Gothic, as he did on the Italian island of Stromboli with actor Ingrid Bergman. Parks’s humanity was evident in his life’s work, as is epitomized in the amazing Flavio de Silva story.