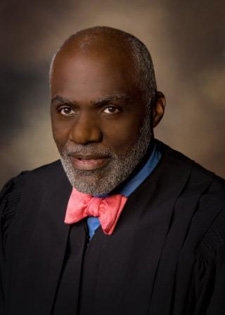 Alan Page is a former professional football player and current Associate Justice of the Minnesota Supreme Court. Born on August 7, 1945 in Canton, Ohio, Page holds the distinction of being the only player to work on the construction of the National Football League (NFL) Hall of Fame as well as be enshrined in it. Page played his high school football at Canton Central Catholic High School where he excelled in all sports; his athleticism and quickness off the ball would later enable him to record 148.5 career sacks in the NFL. Following high school Page attended Notre Dame where he helped lead them to a 1966 National Championship and was awarded All-American honors the same year.

After graduating from Notre Dame in 1967, Page was drafted by the Minnesota Vikings and was part of the famed “Purple People Eaters” defensive line from that year until 1978. Known for his durability, Page played an astounding 218 consecutive games without injury in which he recovered 22 fumbles, scored three touchdowns, and three safeties, the second most in NFL history. Page was a six-time all-pro and was voted to nine consecutive pro bowls. In 1971 page was voted NFL Defensive Player of the Year and well as NFL most valuable player, an honor he was only the second defensive player to receive.

While playing professional football Page attended the University of Minnesota Law School, where he received his law degree in 1978. Following his graduation from law school Page worked for the law firm of Lindquist and Vennum in Minneapolis until 1984. In 1982-1983 he was a commentator for National Public Radio. Two years later, in 1985 Page was appointed Special Assistant Attorney General, and was soon after appointed Assistant Attorney General.  From 1989 to 1993 Page served on the University of Minnesota Board of Regents. Also in 1989 he established the Kodak/Alan Page Challenge, a nationwide essay contest to encourage urban youth to recognize the value of education.

In 1992 Page was elected to an open seat on the Minnesota Supreme Court.  He was the first African American to serve on the Court.

For this commitment to the community Page has received a number of awards including Honorary Doctorates from The University of Notre Dame, Winston-Salem State University, Gustavus Adolphus College, St. John’s University, Westfield State College, Luther College, and University of New Haven.

Page and his wife, Diane Sims Page, live in St. Paul.  They have four children, Nina, Georgi, Justin and Kamie