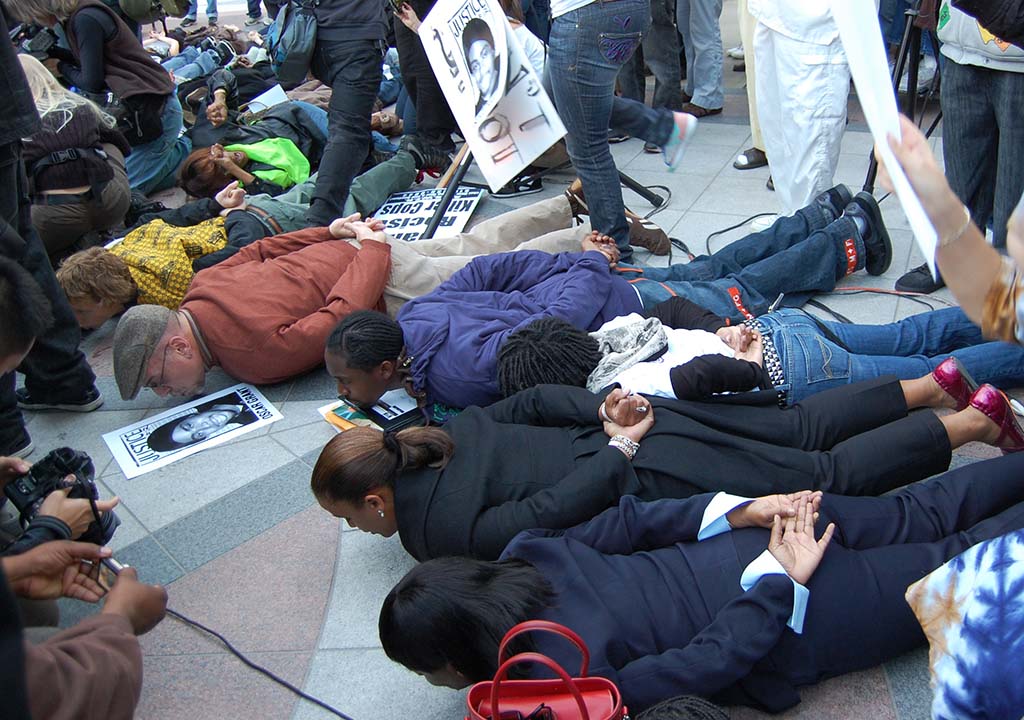 The shooting on New Year’s of Oscar Grant, a 22-year-old black man from Oakland, California, sparked major protests against excessive deadly force used by the police.  These protests began less than a week after Grant had been shot and killed by Johannes Mehserle, a Bay Area Rapid Transit (BART) police officer. The incident had been caught on camera by four different observers, and had gone viral on YouTube. As a result, the black community in Oakland reacted swiftly. While demonstrations began peacefully, tensions would build on both sides with the police eventually resorting to tear gas and non-lethal weapons.

In response to the Grant shooting, Civil Rights activiststhroughout the city organized to protest the unfair treatment of poor African Americans by the transit police. On January 7, 2009 a group of protesters gathered at Fruitvale Station, the site of Grant’s shooting.  After making their way through the Oakland business district, the group began to protest in front of the BART police headquarters.  Along the way about 200 protesters broke away from the planned route and began to vandalize businesses. Even many of those who supported the peaceful demonstrations decried the overall destruction by these vandals. Oakland Mayor Ron Dellums, himself a longtime black Bay Area politician and Civil Rights advocate, denounced the actions of the vandals calling them to “leave in a spirit of peace.”  Overall, the January protests led to over one hundred arrests.

Months later on July 8, 2009, Officer Mehserle, who had resigned from the BART police, was charged with manslaughter.  This charge caused outrage because many believed he should have been charged with second-degree murder. As a result, more protests ensued. Many of these protests began peacefully during the day but violence broke out early in the evening. Groups of anarchists—who were not black Oakland residents—looted businesses, set fires, and caused further public destruction. Oakland Police Chief Anthony Batts claimed that 3 out of 4 of the protesters did not live in Oakland.  By the end of the night, many of the most unruly protesters were arrested.

A third wave of protests began when Mehserle was released in 2011, two years after the shootings. Many Oakland residents were angry over his early release.  These protests, however, remained peaceful.  There were no reports of unruliness or violent interactions with the police and subsequently no arrests.

The protests surrounding the Oscar Grant shooting generated a national uproar in response to shootings of unarmed African American women and men and general police misconduct within the African American community. While local civil rights groups had long protested police brutality, the Grant shooting and the subsequent protests became a major rallying point for what later became the Black Lives Matter movement.