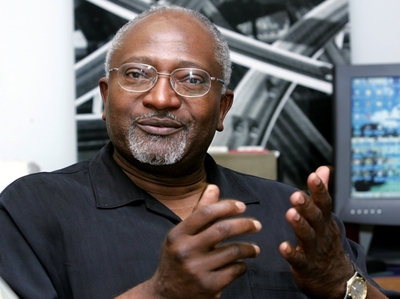 Robert D. Bullard
Fair use image
This entry is sponsored by Sherry Williams

Born on December 21, 1946 in Elba, Alabama, Dr. Bullard is the fourth of the five children of Nehemiah and Myrtle Bullard. In 1964 he graduated as class salutatorian from Elba’s Mulbery Heights High School. In 1968 he graduated from Alabama A&M with a BS in government. He then joined the United States Marine Corps for two years, receiving an honorable discharge in 1970. Dr. Bullard earned a MA in sociology from Atlanta University (Clark Atlanta University) in 1972. In 1976, he received a Ph.D. in sociology from Iowa State University.

Dr. Bullard was drawn into the field of environmental justice in 1978, when asked to conduct research for a lawsuit filed by his wife attorney Linda McKeever Bullard. The lawsuit Bean vs. Southern Waste Management, Inc., was the first of its kind in the United States. Bullard’s research for the lawsuit discovered that race was the driving force behind environmental injustice. Black neighborhoods were the predominant site for most of the solid waste disposal sites in Houston, yet they represented only 25% of the total population.  In 1979 he wrote a study called “Solid Waste Sites and the Black Houston Community,” which represented the first association between toxic waste sites and communities of color.

In 1990 Bullard published his first book, Dumping in Dixie: Race, Class and Environmental Quality. The book documented his 1978 research and is widely recognized as the first book to fully articulate the concept of environmental justice. In Dumping in Dixie, Bullard reports, African Americans in the South bear a disproportionate burden in the placement of hazardous-waste landfills and incinerators, lead smelters, petrochemical plants, and many other toxic facilities.

In 1991, Bullard was a major contributor in the planning of the First National People of Color Environmental Leadership Summit, which brought together a network of grassroots activists concerned about environment justice. During the summit, organizing principles of the modern environmental justice movement were formulated. Later, Bullard was influential in working with the Clinton Administration to enact an executive order that required all federal agencies to consider environmental justice in their programs.

Dr. Bullard has published more than a dozen books on various areas of environmental justice, urban sprawl and transportation, Hurricane Katrina, and transportation racism. He serves on the board of directors for several scholarly and environmental organizations and has won numerous awards, including the Citizens Clearinghouse for Hazardous Waste’s Environmental Justice Award in 1993, the National Wildlife Federation’s 1990 Environmental Achievement Award, the American Sociological Association William Foote Whyte Distinguished Career Award in 2007, and several awards for his books.