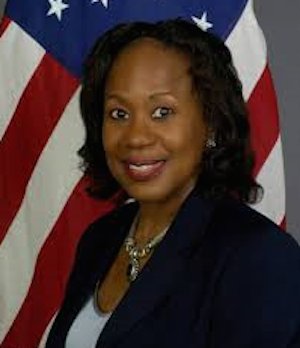 In 2011, Adrienne S. O’Neal, career Foreign Service officer with the rank of Minister Counselor, was appointed by President Barack Obama to serve as ambassador to the Republic of Cabo Verde (or Cape Verde). O’Neal was born in Durham, North Carolina in 1954 to Samuel and Vernese Boulware O’Neal. Her mother was best known as a college professor and later Director of Admissions at Dillard University in New Orleans, Louisiana from 1970 to the early 1990s. Her father was an attorney.

O’Neal graduated from Spelman College (Atlanta, Georgia) in 1976 with dual Bachelor’s Degrees in Spanish Language and Business Administration. Two years later, she graduated from Middlebury College (Vermont) with a Master of Modern Languages degree in Spanish Language and Literature. In 1983, after a brief period in the Ph.D. program in Spanish and Portuguese Literature at the University of Minnesota in Minneapolis, she decided to pursue a career in the U.S. Foreign Service.  Her first assignment in 1984 was at the U.S. Embassy in Rome, Italy.  This was followed by a posting at the U.S. Embassy in Buenos Aires, Argentina in 1987.

In 1991 O’Neal served as a Bureau of Public Affairs officer in the now post-Cold War U.S. State Department.  Her first assignment was as Director for European and Eurasian Affairs where she was responsible for helping former Communist nations in Eastern Europe transition to democracy.

Returning to the United States in 1993, O’Neal was appointed by President Bill Clinton to be Deputy Press Secretary for Lee P. Brown, the Director of National Drug Control Policy (the Drug Czar).  From 1995 to 1998, she served as the U.S. Embassy’s chief press agent in Maputo, Mozambique, during that nation’s transition to democratic rule after 15 years of socialist rule, civil war, and civil unrest.

From 1998 to 2003, O’Neal was Consul General in Rio de Janeiro, Brazil and then from 2003 to 2006 she was Deputy Chief of Mission at the American Embassy in Lisbon, Portugal.  In 2007 O’Neal returned to the United States where she became a Diplomat-in-Residence at the University of Michigan in Ann Arbor, Michigan. Her last posting before her ambassadorial appointment was as the U.S. State Department’s Director of the Senior Level Division of Career Development and Assignments in Human Resources.

In January 2015, Ambassador O’Neal’s term expired.  She and her husband Quincy O’Neal returned to the United States.