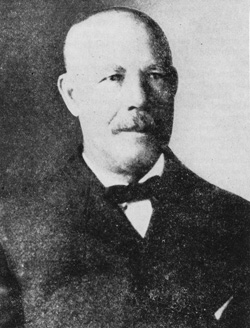 North Carolina congressman James O’Hara was born a free person in New York City to an Irish merchant and West Indian mother. While growing up he worked as a deckhand on ships that sailed between New York and the West Indies.  When he was eighteen O’Hara settled Halifax County, North Carolina with a group of missionaries.

After the Civil War, James O’Hara taught at freedman’s schools in New Bern and Goldsboro, North Carolina. O’Hara also studied law at Howard University in Washington, D.C.  Shortly after North Carolina’s 1868 Constitutional Convention which reorganized state government and authorized black male voting, O’Hara was elected to the North Carolina state legislature.  In 1871, while still in the legislature, he completed his law apprenticeship and passed the North Carolina bar exam.  In 1878 O’Hara won the Republican nomination for North Carolina’s heavily black Second Congressional District.  He lost the general election to white Democrat William Hodges Kitchin. Four years later, in 1882, O’Hara again faced Kitchin and won the election by 18,000 votes.  He was reelected in 1884.

O’Hara served on the House Committees for Pensions, Mines and Mining, and Expenditures on Public Buildings. During his first term O’Hara was the only African American in Congress.  James O’Hara was dedicated to civil rights and progress for African Americans. He was an active speaker against racial violence and introduced one of the first bills to make lynching a federal crime.  When the House considered a bill to regulate interstate commerce O’Hara introduced an amendment requiring equal accommodations for all travelers.  His amendment failed.  O’Hara also fought for the rights of women when he introduced a bill that would prohibit gender based salary discrimination in education.

O’Hara stood for reelection in 1886 but faced another black Republican, Israel B. Abbott.  O’Hara lost in the primary and returned to North Carolina after his term ended.  He practiced law with his son Raphael and published a small newspaper called the Enfield Progress. In September 1905 James Edward O’Hara died of a stroke at age 61.