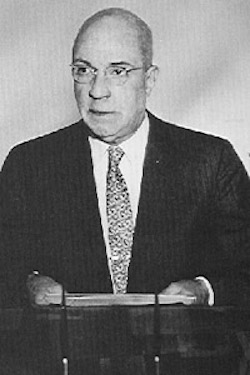 Norris Bumstead Herndon was the second president of the Atlanta Life Insurance Company, founded by his father, Alonzo Herndon, in 1905. Herndon was born in Atlanta, Georgia, on July 15, 1897, the only child of Adrienne Elizabeth McNeil, a graduate and teacher at Atlanta University, and Alonzo Herndon. His family’s light complexion allowed them to easily fit into the surrounding white community without question, and Herndon’s early education was in the Atlanta Public School System. In 1905, Alonzo Herndon took seven-year-old Norris to the founding meeting of the Niagara Movement, the precursor organization to the National Association for the Advancement of Colored People (NAACP).

Norris Herndon’s mother died in 1910, just four months after the family moved into their new home. It devastated young Herndon, who–according to friends–was struggling with his sexuality and identity. With a stern father who insisted upon “the straight and narrow course,” Herndon learned to deny his feelings toward men and conduct a very private social life as an adult.

In 1919, Herndon graduated from Atlanta University. He then obtained a Master’s in Business Administration from Harvard University’s Business School in Massachusetts in 1921. He was one of the only two African Americans in his graduating class. Young Herndon joined his father’s firm, first as a cashier and then eventually as the company’s first vice president.

After his father’s death in 1927, and at the age of twenty-eight, Herndon was elected the second president of Atlanta Life Insurance Company.  In that same election, his stepmother Jessie (Gillespie) became vice president. When he took the helm, company assets totaled just over $1 million, but through decades of cautious management and prudent investments including some significant acquisitions, Atlanta Life’s assets grew to $54 million. At the time of Herndon’s retirement in 1973, Atlanta Life had grown to a company with assets of $84 million.

Shortly after his stepmother, Jessie, died in 1947, Herndon established the Alonzo F. and Norris B. Herndon Foundation, a charitable trust which today operates the Herndon Home as a museum, recounting the family’s rise from slavery to business leaders in the African American community.

Herndon also gave generously to the United Negro College Fund, the local African American YMCA, Atlanta University, Morris Brown College, First Congregational Church in Atlanta, the National Urban League, the NAACP, as well as many other organizations. In 1948, he donated the land on which Atlanta University’s Herndon Stadium sits, and the money to build the structure. Additionally, he was a member of the Atlanta Chapter of the Grand Order of Odd Fellows and Alpha Phi Alpha Fraternity, the first collegiate-level fraternal organization for African American men.

Despite his business success and philanthropic work through the Herndon Foundation, Norris Herndon was mostly reclusive. He rarely spoke and was seldom seen by his employees or by the public. The heavyweight boxing champion Joe Louis was once invited to dinner at the Herndon home one day after a recent boxing exhibition in Atlanta. Louis walked in, looked around, and said, “Nice place you got here.” Herndon replied, “Thank you” but said nothing else the entire evening. A puzzled Louis left shortly after dinner was served.

Norris Herndon never married. He died on June 7, 1977.  He was found in his bed, and the cause of death was listed as a heart attack.  He was later buried in his hometown of Atlanta, Georgia.