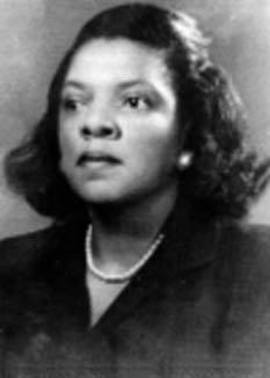 Marjorie Lee Browne was a prominent mathematician and educator who, in 1949, became only the third African-American woman to earn a doctorate in her field.  Browne was born on September 9, 1914, in Memphis, Tennessee, to Mary Taylor Lee and Lawrence Johnson Lee. Her father, a railway postal clerk remarried shortly after his wife’s death, when Browne was almost two years old. He and his second wife, Lottie, a school teacher, encouraged their daughter to take her studies seriously as she was a gifted student. Browne attended LeMoyne High School, a private Methodist school that was started after the Civil War. During her schooling, she won the Memphis City Women’s Tennis Singles Championship in 1929 and two years later graduated from LeMoyne High School.

Later that same year, Browne joined the faculty at North Carolina College (now North Carolina Central University) where she remained for the next thirty years. For the first twenty-five years of her career, she was the only person in the mathematics department with a Ph.D. in mathematics. While she taught, Browne also worked as a principal investigator, coordinator of the mathematics section, and lecturer for the Summer Institute for Secondary School Science and Mathematics Teachers.

During her time at North Carolina Central University, Browne taught both undergraduate and graduate courses, wrote proposals for equipment, and obtained grants for scholarships from Shell, IBM, and other major corporations. In the early 1950s, the Ford Foundation awarded her a fellowship to study combination topology (a modern version of geometry that became her specialty) at Cambridge University in the UK, and from 1958 to 1959, Browne was a National Science Foundation Faculty Fellow studying numerical analysis at the University of California, Los Angeles (UCLA). In 1960 she received a $60,000 grant from IBM to set up an electronic digital computer center at North Carolina College, one of the first of its kind at a predominantly black college.

Before her retirement in 1974, Browne was the first recipient of the W.W. Rankin Memorial Award for Excellence in Mathematics Education from the North Carolina Council of Teachers of Mathematics. After retirement, she used her own money to provide financial aid to many gifted young people so they could pursue their educations. Notable students included Joseph Battle, William Fletcher, Asamoah Nkwanta, and Nathan Simms. She established summer institutes to provide continuing education in mathematics for high school teachers.

Over the course of her lifetime, Marjorie Browne served as a member of numerous organizations, including the Women’s Research Society, the American Mathematical Society, and the Mathematical Association of America. In addition, Browne was one of the first African American women to serve as a member of the advisory council to the National Science Foundation.