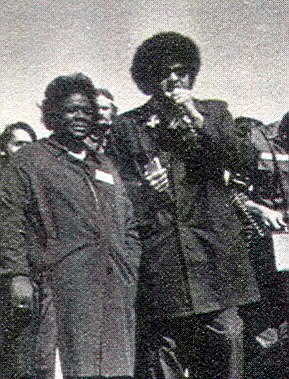 The National Welfare Rights Organization (NWRO) was created in 1966  to fight for greater assistance and control over welfare regulations. In the 1950s, politicians and journalists drew attention to the rapid increases in the welfare rolls, especially among African American single mothers. Punitive laws were passed to decrease the number of recipients and the size of their welfare grants. Considering their poverty and out-of-wedlock birth rates, African American women were actually underrepresented on the welfare rolls. Nonetheless because many of them were concentrated in the major cities, in the public’s mind, the face of the typical welfare recipient was black. Welfare recipients started organizing in the early 1960s in response to these politically motivated attacks.

The NWRO grew out of the efforts of local organizations of impoverished people from across the country to challenge their negative public image and to promote the idea that impoverished people should be treated with respect and dignity by their fellow citizens.  In 1966 these local organizations sent delegated to two national conventions in Chicago, Illinois and Syracuse, New York.

Meanwhile in May 1966 Dr. George Wiley, a prominent chemist and former associate director of the Congress of Racial Equality (CORE) who was then working at Syracuse University, set up the Poverty Rights Action Committee (PRAC) which organized demonstrations across the nation including a march of welfare recipients from Cleveland to Columbus, Ohio to demand higher payments and more respectful treatment by state and local welfare case workers.  The June 30 Cleveland to Columbus March was considered the founding event of the NWRO.

In August 1967 delegates representing 67 local welfare rights organizations met in Washington, D.C. and founded The National Welfare Rights Organization with George Wiley as its first executive director.  NWRO, which had four goals: adequate income, dignity, justice, and democratic participation, was active from 1966 to 1975.  At its height in 1969 it had a membership of as many as 25,000 people, with thousands more participating in NWRO protests. The majority of the members were African American women who often were on public assistance (welfare).

In 1969, the NWRO captured public attention when it targeted President Richard Nixon’s Family Assistance Plan. Meanwhile internal dissension arose between the mostly male middle-class staff and the mostly female welfare recipients regarding the strategies and goals of the NWRO.  Wiley sought to expand the movement to include the working poor. Welfare recipients led by Johnnie Tillmon, on the other hand, tried to redefine welfare rights as a women’s issue and pursue a black feminist agenda.

Late in 1972, Wiley resigned and Tillmon was appointed as the NWRO’s new executive director. Three years later, in March 1975, the NWRO went bankrupt and the organization came to an end. Its legacy, however, continued as numerous welfare rights organizations struggled for extending welfare recipients’ rights at the local level.