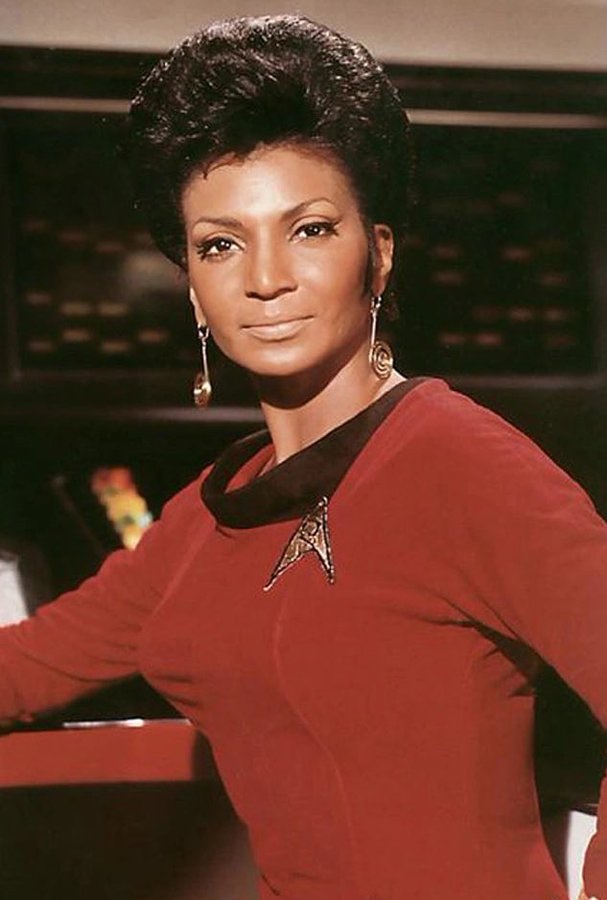 Nichelle Nichols was born Grace Nichols on December 28, 1932, in Robbins, Illinois. Discovered by Duke Ellington at the age of 15, she began her career as a singer touring the country with his band. After the tour was over, Nichols worked in Los Angeles as a model, stage actress, and in small roles on television. In 1966, she landed her most famous role as Lieutenant Uhura in the Star Trek series.  As Lt. Uhura, she portrayed the communications officer in the popular series and shared the first interracial kiss on television with William Shatner. Nichelle Nichols planned to leave the show after the first season to return to the stage, but a meeting with Dr. Martin Luther King, Jr. led her to change her mind. King explained that her role was the first on television to show a Black person as intelligent, proud, and beautiful—someone everyone needed to see and know. Nichols stayed in her role through the end of the series and in the successive movies.

It was her role as Lt. Uhura that developed Nichols’s interest in space research and exploration. Nichols became involved in various space programs and was appointed to the National Space Institute. In 1977, NASA asked Nichols to be the spokesperson for their recruitment drive for astronauts, specifically to recruit more women and people of color. By the end of her campaign, which lasted into the late 1980s, the number of applicants was five times greater than before, with more than thirty percent of the applicants from their target group. Nichols received the distinguished NASA Public Service Award for her efforts and continues to serve on the board of the National Space Society. In addition to her work as a performer and space enthusiast, Nichols had written a series of science fiction novels. Throughout her diverse career, Nichelle Nichols had continued to sing and perform around the world.