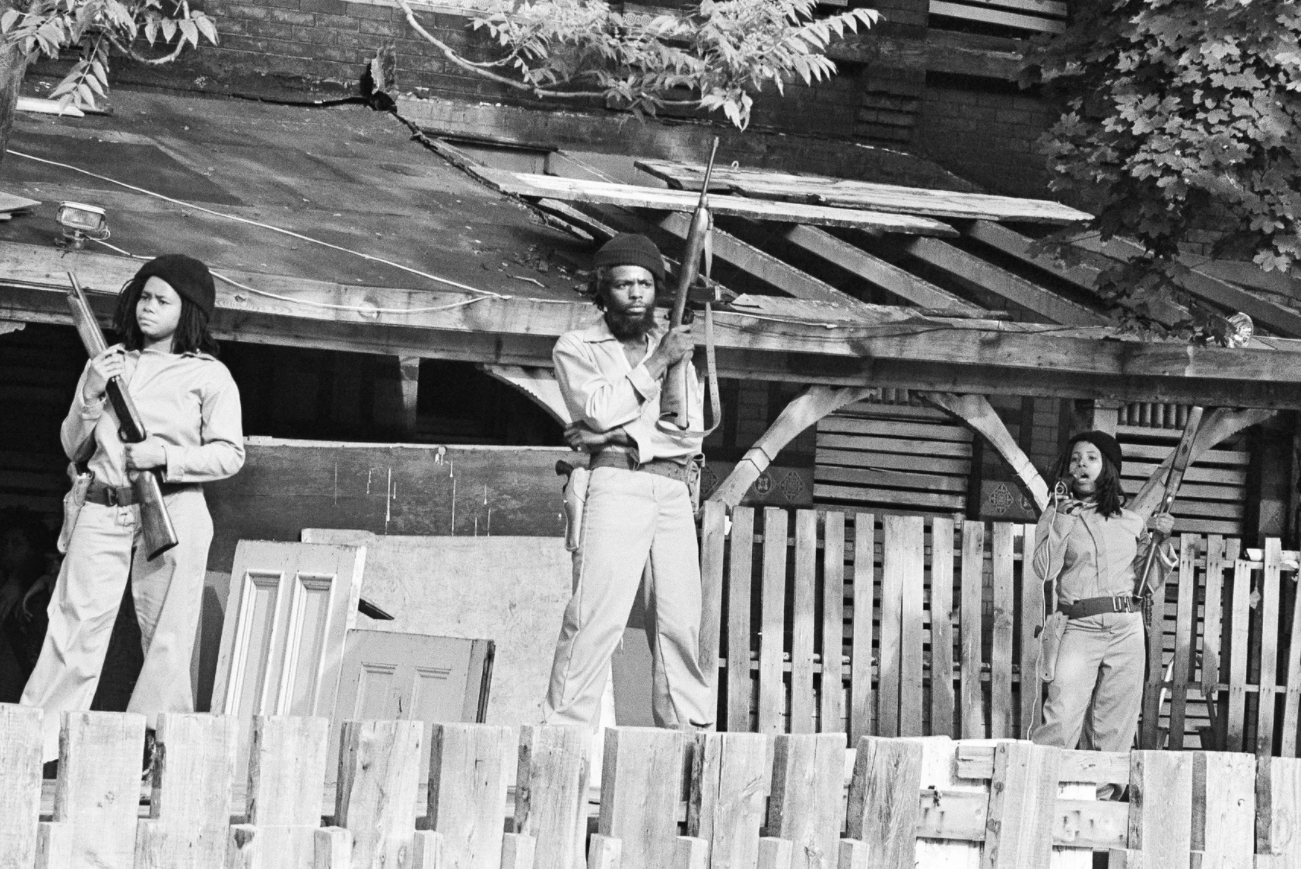 MOVE members hold sawed-off shotguns and automatic weapons as they stand in front of their barricaded headquarters on May 21, 1977
© AP, Fair use image

MOVE is a Philadelphia, Pennsylvania-based black liberation group, whose foundation was built on philosophies of black nationalism and anarcho-primitivism, as well as animal rights. The group was founded in 1972 by Vincent Leaphart, a native of West Philadelphia, who could not read or write. He was drafted into the US Army in 1951, during the Korean War, and served one year in an infantry unit. He returned home after the war and soon began courting a neighborhood woman, Dorothy Clark. On March 11, 1961, the two were married, but Leaphart moved to New Jersey to study and practice interior decorating. By 1968, the couple separated.

In 1972, Leaphart began a series of racial teachings that grew a following of people who believed in his ideology. He changed his surname to Africa in 1972 to represent the continent from where his ancestors originated. Africa, along with his followers, moved into a home on Pearl Street in Philadelphia, and founded The Christian Movement for Life, the foundation of the organization eventually known as MOVE. Assisted by social worker Donald Glassey, Africa compiled his thoughts into an 800-page book called The Guidelines, which became the primary source of his teachings and principles for the organization.

MOVE members wore their hair in dreadlocks, advocated a radical form of environmental politics, and opposed science, medicine, and technology. They regularly held demonstrations against animal cruelty in front of zoos, puppy mills, and any institutional form of enslavement of animals. The members were often jailed for their actions.

In the summer of 1978, MOVE members reached a deal with the city of Philadelphia. If several of their members were released from jail, they would turn over their weapons and leave the building they occupied in the Powelton Village section of West Philadelphia. The city honored their terms, but MOVE did not.

On August 8, 1978, the Philadelphia police attempted to forcibly evict the MOVE members from their home at 311 North 33rd Street, generating a stand-off. After a single shot was heard, a shootout occurred between the police and MOVE members. Officer James J. Ramp, was shot in the back of the neck while facing the home and was killed. Sixteen other officers were injured.

MOVE members surrendered but were beaten by multiple officers upon exiting the home. Nine members of the MOVE organization (Chuck Africa, Phil Africa, Eddie Africa, Delbert Africa, Janet Africa, Janine Africa, Michael Africa, Merle Africa, and Debbie Africa) were arrested, convicted of murder, and sentenced to life in prison. The group became known as the MOVE 9. All other MOVE members were evicted, and the property was demolished.

During the pending investigations, Glassey implicated Vincent Africa and other MOVE members in unsolved crimes to avoid prosecution, but on July 23, 1981, during the federal trial, Africa and co-defendant Alfonso Africa were acquitted of all charges. Of the MOVE 9, Merle died in prison in 1998 and Phil in 2015. Debbie was released on parole in June 2018 and Michael in October. Janet and Janine came out in May 2019, Eddie in June, and Delbert in December of 2019. Chuck was released in February 2020. Remaining MOVE members continue to advocate for the release of previously jailed members.