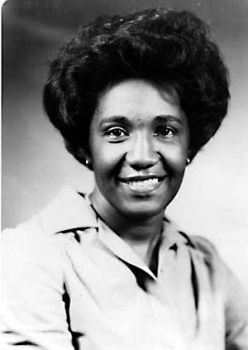 Azie Taylor Morton was a teacher, politician and the only African American to hold the position of Treasurer of the United States.

Taylor was born to Fleta Hazel Taylor, who was deaf and mute, on February 1st, 1936 in the small community of St. John Colony of Dale, Texas. Taylor did not know her father and was raised by her maternal grandparents on a small farm. During her adolescence, Taylor worked in the cotton fields. Although she was not blind, deaf or an orphan, she attended the Texas Blind, Deaf, and Orphan School during her high school years because there was no high school for African Americans in Dale. She graduated at the top of her class at age 16.

Taylor instead took a job as a teacher in a state-sponsored school for delinquent girls. She held that position for a year and then was hired as Huston-Tillotson’s assistant to the President. She remained at Huston-Tillotson for a few months until she was hired to work at the Texas AFL-CIO state headquarters in Austin. In 1961 she was invited by President John F. Kennedy to work for the Committee on Equal Employment Opportunity. She remained with the committee for 20 years, filling various positions. Taylor married James Homer Morton in 1965.

In 1977 Morton accepted President Jimmy Carter’s invitation to serve as the 36th Treasurer of the U.S.  She held the post from September 12th 1977 until January 20th, 1981. In addition she was a member of the American Delegation to Rome, Italy for the Enthronement of Pope John Paul II in 1978; Chair of the People to People Mission to the Soviet Union and China in 1986; and an Election Observer for Presidential elections in Haiti, Senegal and the Dominican Republic. She also was a representative to the first African/African American Conference held in Africa.

After returning to Austin, Morton served on the Austin Housing Authority Board of Commissioners (HACA) from 1999 to 2001. In honor of her service, the HACA created the Azie Morton Scholarship Fund for low-income students at Huston-Tillotson.

Azie Taylor Morton experienced a massive stroke at her home in Austin Texas on December 6th, 2003.  She died the following day from complications due to the stroke.

Morton was survived by her two daughters.