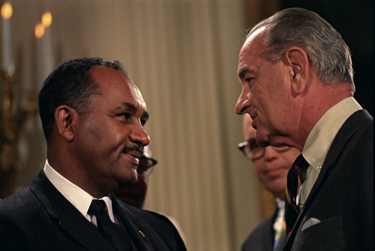 Clarence M. Mitchell, Jr. the chief lobbyist for the National Association for the Advancement of Colored People (NAACP) from 1950 to 1978 played a central role in winning passage of the landmark civil rights legislation that transformed the nation in the 1950s and 1960s.  Clarence Mitchell was born in Baltimore, Maryland, on March 8, 1911.  He was the third of ten children of Clarence Maurice Mitchell and Elsie Davis Mitchell.  Clarence’s brother Parren Mitchell, eleven years younger, would become the first African American from Maryland elected to the United States House of Representatives.

Mitchell grew up in a working-class neighborhood that was more ethnically diverse than most segregated Baltimore neighborhoods of the era.  After graduating from Lincoln University in Pennsylvania, he went to work for a hometown newspaper, the Baltimore Afro-American.  As a young journalist Mitchell reported on lynchings and he first testified in Congress in 1933 in support of an anti-lynching bill.  In 1938, Mitchell married Juanita Jackson, a fellow Baltimorean who had founded a youth civil rights group and then headed the NAACP’s youth program.  The Mitchells had four sons.  After working for the Urban League and various federal agencies, Mitchell joined the NAACP in 1946 as labor secretary in its Washington Bureau.

In 1950, Mitchell became director of the NAACP’s Washington Bureau and legislative chairman of the Leadership Council on Civil Rights, a coalition of civil rights, religious, labor, and civic groups.  That post made him a leader in the drive for federal civil rights legislation.  The breakthrough came with enactment of the 1957 Civil Rights Act, the first civil rights measure passed since Reconstruction.  Although the bill was seen as a disappointment at the time because southern opponents succeeded in watering it down, Mitchell said “The importance of getting that bill through was that we could break the spirit of defeat around here on civil rights legislation.”

Mitchell retired from the NAACP in 1978 but continued working.  He wrote a weekly column for the Baltimore Sun, served on the University of Maryland’s Board of Regents, and practiced law with Juanita and their son Michael (Clarence Mitchell earned a law degree from the University of Maryland in 1962 while working full time as a lobbyist).  President Jimmy Carter awarded Mitchell the Presidential Medal of Freedom in 1980; eleven years after the NAACP gave him the Spingarn Medal, its highest honor.  Mitchell died at his Baltimore home on March 18, 1984. He was 73 at the time of his death.