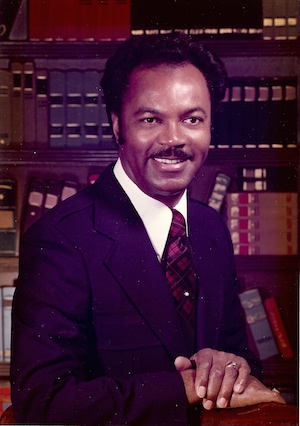 In 1943, Merriwether entered Howard University where he became president of Omega Psi Phi Fraternity.  He earned a Civil Engineering degree from Howard in 1947.  Later that year he moved to Seattle, Washington and began his career with the City of Seattle’s Building Department as a Structural Plan Examiner.  Merriwether was the third black engineer to work in Seattle.  In 1949, at the age of 25, Merriwether built his first new apartment building, the 18-unit Chrystal Arms followed by the Chrystal Plaza, and another 18 units the next year.  Both buildings were named for his daughter, Chrystal.  These were soon followed by three more apartment buildings with a total of 54 units.

In 1952, Merriwether bought The Pacific Leader, a newspaper serving the black community, from City Councilman Sam Smith.  As editor of the paper Merriwether teamed with National Association for the Advancement of Colored People (NAACP) attorney Phillip Burton, to challenge racial discrimination in the city.  The Pacific Leader and the NAACP led a successful campaign to get local banks to hire the first black bank teller.  They also pressured the Tradewell chain of grocery stores to hire black clerks and persuaded the owners of a central Seattle office building to rent to black professionals.  In 1965 Merriwether was a founding member of Alpha Omicron Boule of Sigma Pi Phi fraternity.

Deciding to return to school to gain more skills to further his career, Merriwether enrolled at the University of Washington and Washington State University from 1955 to 1960 and earned a degree in Architecture and a graduate degree in Urban Planning.  Merriwether moved from Seattle to Kirkland, Washington, one of its suburbs in 1962.

Merriwether  then retired to manage his own affairs and pursue his hobbies: golf, bridge and traveling.  He and his wife, Barbara, in their 31 years of marriage traveled around the world.  Raymond Merriwether died in Seattle on May 23, 2011.  He was 87.