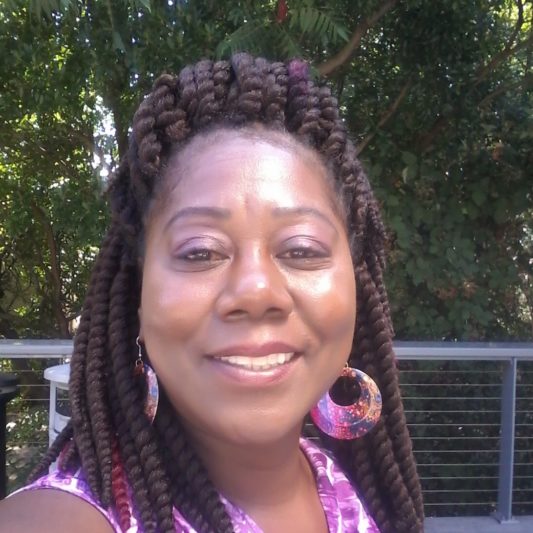 Secret Charles-Ford, Ed.D, graduated from the School of Educational Leadership & Change at Fielding Graduate University (2014). Dr. Charles-Ford earned two master degrees while attending Antioch University, Seattle. Her first graduate degree was earned in the Environment & Community program (2004) with a second graduate degree earned in Education (2007). Dr. Charles-Ford earned her undergraduate degree through the Department of Geography at the University of Washington. She served on the Sacramento, California Environmental Commission (SEC) from 2014 to 2015. The SEC was created by the Sacramento County Board of Supervisors and Sacramento City Council in 1988 with a broad charter to provide information, analysis, and advice to the elected officials on environmental issues, and to provide assistance and advice to the Environmental Management Department on environmental programs.

Angella Ferguson is best known as a medical researcher. Her pioneering research focused on the development of the sickle cell disease among African American infants. Eventually, she developed a blood test to detect sickle cell at birth and this test became standard for forty U.S. … END_OF_DOCUMENT_TOKEN_TO_BE_REPLACED

Eunice S. Reddick, an American diplomat and United States Ambassador to the Republic of Niger, was born in 1951 in New York City, New York. Reddick received her Master’s degree in International Affairs from Columbia University’s School of International Affairs in 1975 and then worked … END_OF_DOCUMENT_TOKEN_TO_BE_REPLACED

Dr. Dawn Mason is a former Washington State Representative for the 37th District, an adjunct professor and former member of the Board of Visitors at Antioch University Seattle, and Vision and Planning Team Member for Cultural Reconnection (USA and Kenya). Mason was born in Jersey … END_OF_DOCUMENT_TOKEN_TO_BE_REPLACED

Bruce Allen Harrell, who was elected to the Seattle City Council in 2007, has spent over 20 years as an attorney and community volunteer.  Harrell was born in Seattle, Washington, in 1958 to Clayton Harrell and Rose Tamaye Harrell.  Due to his parent’s ethnicity, Harrell … END_OF_DOCUMENT_TOKEN_TO_BE_REPLACED

Richard J. McIver was first appointed to fill a vacancy on the Seattle City Council in early 1997 and was subsequently reelected to three full four-year terms in 1997, 2001, and 2005. Councilmember McIver, was a fifth-generation Seattleite, was born on June 14, 1941 to … END_OF_DOCUMENT_TOKEN_TO_BE_REPLACED

John Lovick is one of the most successful African American politicians in Washington state history.  He has held a number of political positions at the state and county level and is currently a member of the Washington State House of Representatives for the 44th District … END_OF_DOCUMENT_TOKEN_TO_BE_REPLACED

Yalonda Sinde was born in Seattle Washington to working-class parents.  Her father was a steward with Amtrak for many years and her late mother was a hairdresser.  She is the oldest of three sisters.  Sinde’s father inspired much of her activism.  “Watching what my father … END_OF_DOCUMENT_TOKEN_TO_BE_REPLACED