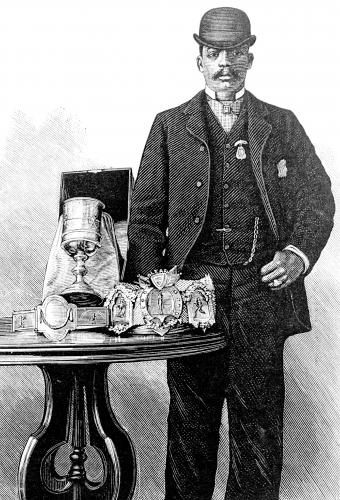 In the late 1870’s and early 1880’s, the sport of “six day, go as you please” endurance racing gripped the United States and Great Britain.  The participants in these events were called pedestrians, and they were free to run or walk around an indoor track for as long as they could stay on their feet.  The top pedestrians survived on less than four hours of sleep a day and slept on cots inside the track’s oval.  Fans followed these six day contests of endurance with all the fervor of today’s NFL fans.  They also placed bets on prospective winners.

On April 10, 1880, an African American pedestrian, Frank Hart stood atop this international craze for six-day racing.  His given name was Fred Hichborn, but he changed it to Frank Hart when he turned professional.  Hart had just won the prestigious O’Leary Belt competition and smashed the world record, after covering 565 miles in six days of racing.  He earned about $17,000 in prize money, which was a small fortune in 1880.  As the race ended, he waved an American flag to thousands of cheering fans who packed Madison Square Garden.   Another African American, William Pegram of Boston finished second with 540 miles. Hart also competed in one of the international Astley Belt competitions, and set an American record when he won the Rose Belt in Madison Square Garden in December 1879.

Hart was born in Haiti in 1858, immigrated to the United States in the 1870’s and began working in a grocery store in Boston, Massachusetts.  As the pedestrian craze swept the nation, he began competing in local events.  He soon caught the eye of Daniel O’Leary, an Irish immigrant and sports promoter who had once held the world record for six day racing and had twice won the Astley Belt competition.  O’Leary financed Hart during his professional career.  Hart earned the nickname “Black Dan” from his association with O’Leary.  In later years, he played professional baseball in a Chicago Negro league. Hart died in Chicago in 1908.

Frank Hart should be remembered as a pioneer ultra-marathoner who pushed the limits of human endurance.  He also offered hope that blacks and whites could compete against each other as equals.  Hart suffered through his share of racial taunts during these six day contests, but he was also wildly popular with thousands of spectators of all races who followed the sport.

As interest in six-day racing died, Hart’s brilliant career was almost forgotten.  The nation would have to wait another fifty years before African American ultra-marathoners and again caught the country’s attention—this time in the “bunion derby,” the first footrace across American, held in 1928. Three black runners, Eddie Gardner, Sammy Robinson, and Toby Joseph Cotton, Jr., risked their lives as the Los Angeles to New York City course took them across parts of the segregated South, in this incredible 3,422-mile, 84-day odyssey across America.