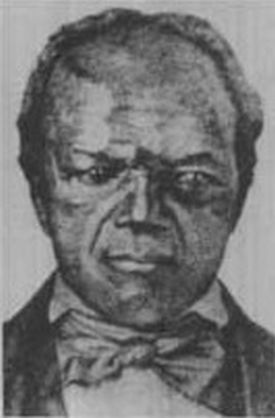 John Berry Meachum was a businessman, a founder of the oldest black church in Missouri, and a pioneer in the education of blacks in that state. Meachum was born a slave in Goochland County, Virginia on May 3, 1789.

His owner, Paul Meachum, moved Meachum to North Carolina and then Kentucky, where Meachum learned several trades, including carpentry, and met his future wife, Mary. By the time he was 21, he had earned enough money from carpentry to purchase his freedom and, soon after, the freedom of his father. In 1815, before Meachum had earned the necessary funds to purchase his wife’s freedom, she was moved to St. Louis. He followed her there and then purchased her freedom with his earnings.

In St. Louis, Meachum met John Mason Peck, a white Baptist missionary who had just moved to the state to start a worship and educational center for Native Americans. Peck identified a need for a worship place for blacks and enlisted the help of Meachum. Together, Peck and Meachum built the fledgling church while Meachum continued his trade. After being ordained in 1825, Meachum officially opened the First African Baptist Church.

Through the First African Baptist Church, Meachum and Peck began offering religious and secular education to free and enslaved black St. Louisans. Meachum’s school attracted up to 300 pupils and did not charge tuition to those who could not afford it. Although white Missourians had originally supported schooling for blacks as a means for strengthening Christianity, racial tensions caused many of them to now see educated blacks as a threat to slavery. Around the time Meachum opened his school, St. Louis enacted an ordinance banning the education of free blacks. This ordinance was only sporadically enforced, but police did force Meachum to temporarily disband the school. In 1847, Missouri banned all education for blacks. Meachum responded by equipping a steamboat with a library, desks, and chairs and opened the “Floating Freedom School” on the Mississippi River beyond the reach of Missouri officials.

Meachum and his wife also facilitated the Underground Railroad through their home and their church. Meachum’s carpentry business was successful enough for him to purchase and free twenty slaves. Meachum trained each in carpentry and other trades so that they could support themselves.  Nearly every individual freed repaid Meachum allowing him to free others.

Despite his work to free Missouri slaves and educate blacks, Meachum’s views on education and black equality anticipated those of Booker T. Washington a half century later: black people needed practical, hands-on education so that when freedom came, the race would be ready to utilize that freedom. Meachum illustrated this view in “An Address to All of the Colored Citizens of the United States,” a pamphlet printed in Philadelphia, Pennsylvania in 1846.

Meachum left a lasting impact on St. Louis. His school educated hundreds of free blacks and slaves including James Milton Turner who after the Civil War would found Lincoln Institute, the first school of higher education for blacks in Missouri. The work of Meachum and his wife on the Underground Railroad is now commemorated at the Mary Meachum Crossing in St. Louis, where the two led slaves across the Mississippi River to freedom in Illinois. The First African Baptist Church (now the First Baptist Church) continues to operate in St. Louis. John Berry Meachum died at his pulpit on February 19, 1854.

Donnie D. Bellamy, “The Education of Blacks in Missouri
Prior to 1861,” The Journal of Negro History 59:2 (1974); Dennis L.
Hurst, “The Reverend John Berry Meachum (1789-1854) of St. Louis:
Prophet and Entrepreneurial Educator in Historiographical Perspective,”
The North Star: A Journal of African American Religious History 7:2
(2004); http://docsouth.unc.edu/neh/meachum/meachum.html.