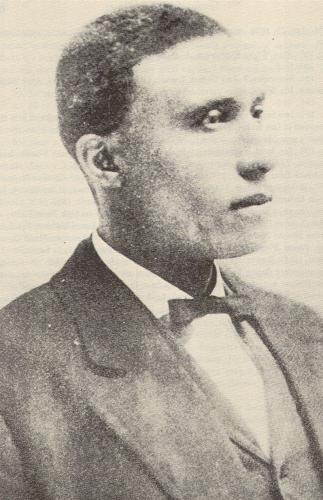 Born on June 22, 1866 in Kaufman County, Texas, William Madison (Gooseneck Bill) McDonald’s parents had been slaves. His father, George McDonald, was born in Tennessee and his mother, Flora Scott McDonald, in Alabama. His mother died when he was five, and his father married his second wife, Belle Crouch. McDonald started school in 1872 and graduated from high school in 1884.

An excellent student, McDonald worked for attorney and rancher Z.T. Adams, who took an interest in his young employee, lecturing him on business and law while he worked. After graduating, McDonald attended Roger Williams University in Tennessee, with support from Adams. He also became principal of the African American high school in Forney, Texas, where his first wife, Alice Gibson McDonald, taught.  McDonald remained principal for several years.

Throughout his life, McDonald sought wealth and power. In doing so he used three positions—as a politician (Republican), as a businessman (banker), and as a fraternalist (principally the Masons).With this foundation, McDonald led Texas’ Republican Party “Black and Tan” faction for thirty years, a group opposed to the machinations of the “Lily Whites.” His political partnership with wealthy businessman E.H.R. Green provided him a strong voice in state politics. In 1899 he became Grand Secretary of the Prince Hall Free and Accepted Masons of Texas, a powerful and influential position he held for almost 50 years. McDonald cemented his influence by membership in at least three other fraternal groups.  In addition to gaining prestige and influence McDonald received voting and financial support from his fraternal brothers (and later sisters).

McDonald moved in 1906 to Fort Worth where he was a civic leader and successful businessman. He built his bank, the Fraternal Bank and Trust Company in 1912, with support from the black fraternities. The bank was successful and well run, surviving even during the Great Depression. For the last years of his life McDonald stayed out of politics, let others run the fraternities, lived a leisurely life, and died on July 4, 1950.