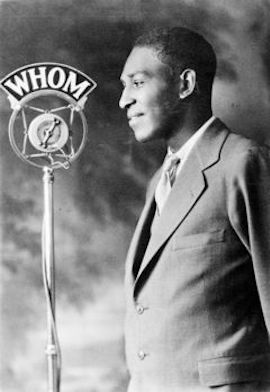 Sherman “Jocko” Maxwell was born December 18, 1907, in Newark, New Jersey. He was an African American sports broadcaster, journalist, and postal worker and best known as a chronicler of the Negro Baseball League.

Sherman Leander Maxwell was the son of William and Bessie E. (Harris) Maxwell. His parents named him after the Civil War general, William Tecumseh Sherman. In 1928 Sherman graduated from Newark Central High School. He had hoped to attend Panzer College of Physical Education and Hygiene in East Orange, New Jersey, only to find it did not accept black students. He received his nickname of “Jocko” when he was a teenager. He had been passionate about baseball ever since childhood, although he never thought he was good enough to play professionally. When Maxwell once climbed a tree in an attempt to catch a fly ball, someone yelled, “Hey, look at Jocko!” Jocko the Monkey was the name of a popular performer in the 1920s-era films, and the name stuck.

Maxwell’s broadcast career began in 1929 when he talked the owner of WNJR (West New Jersey Radio) in Newark into giving him five minutes of air time every Saturday to read scores. He later served in World War II, taking pride in the fact that his quick typing skills landed him a job organizing entertainment such as boxing matches for his Army regiment. Before he was sent overseas, he married his longtime sweetheart, Mamie Bryant, in June 1943. After his service, Maxwell went on to broadcast for various stations over the years, all while working full-time as a postal clerk.

During his career, Maxwell also ran his own multiracial semi-pro baseball team, the Newark Starlings, and was the voice of the Newark Eagles at the city’s old Ruppert Stadium. Maxwell was also a prolific writer, who would cover Negro League games and submit write-ups to the newspapers, including Newark Ledger, predecessor of The Star-Ledger, which didn’t cover the games at that time. In addition to the local papers, his work appeared in the Sporting News and other magazines. He also wrote a book titled Thrills and Spills in Sports (1940).

Monte Irvin, a Hall of Fame baseball player who once played for the Negro Leagues’ Newark Eagles, said of Maxwell, “He was unique; we all thought that was just a great thing.” Sam Lacey, the late sports columnist for the Baltimore Afro-American said, “No blacks were doing it, not in this country,” he said. “Absolutely, he was the first.”

Sherman Maxwell retired from radio in 1967. Jerry Izenberg, columnist emeritus for The Star-Ledger, said, “The first thing about Jocko to know is that there would be very few records of the Negro Leagues that are accurate and there would be almost none without him. He could sense the meaning of what he was doing. He knew that one day this stuff would be important.” In 1994 Maxwell was inducted into the Newark Athletic Hall of Fame.

Sherman Leander “Jocko” Maxwell died on July 16, 2008, in West Chester, Pennsylvania, due to complications of pneumonia. He was one hundred years old. Maxwell was preceded in death by his wife, Mamie, and his daughter, Lisa. He was survived by his son, Bruce, his sister, Berenice, and her son, John Cross.