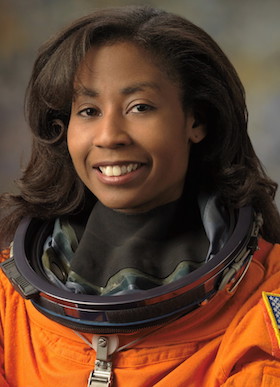 Stephanie Diana Wilson is an American NASA astronaut, engineer, and is the second African American woman to go into space, following Mae Jemison. Wilson was born September 27, 1966, in Boston, Massachusetts. In 1984 she graduated from Taconic High School in Pittsfield, Massachusetts, and four years later received a Bachelor of Science in Engineering from Harvard University. Wilson earned a Master of Science in Aerospace Engineering from the University of Texas in 1992.

After graduating from Harvard, Wilson worked for two years at Martin Marietta Astronautics Group in Denver, Colorado, where she served as a loads and dynamics engineer for the Titan IV rockets. She left Martin Marietta in 1990 to attend graduate school at the University of Texas, and in 1992 she began working for the Jet Propulsion Laboratory in Pasadena, California. Among her duties was software development and assessing the accuracy and performance of the Galileo spacecraft.

NASA selected twenty-nine-year-old Wilson as an astronaut in April 1996. After two years of training, she qualified for flight assignment as a mission specialist. Initially, she was assigned technical duties with the orbiting space station but she later worked in mission control as a prime communicator with on-orbit crews.

The STS-121 mission, her most important flight, brought new equipment and procedures to the international space station. The mission, which had a sixteen-member crew, produced never before seen high resolution images of the shuttle and repaired a rail car on the international space station. Wilson was responsible for the transfer of more than twenty-eight thousand pounds of equipment and supplies to the ISS.

Wilson remains an active astronaut and engineer for NASA today.