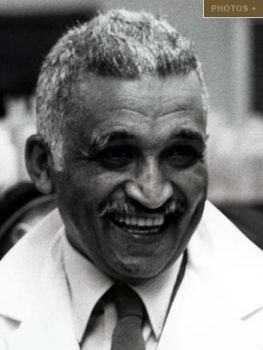 Born on July 3, 1919 in North Little Rock, Arkansas, Samuel Proctor Massie was as one of the few African American scientists to work on the Manhattan Project during World War II. He later became a distinguished professor of chemistry.

As he neared the completion of his doctorate in chemistry at Iowa State University in 1942, Massie lost his draft deferment.  When he was about to be drafted in his home state of Arkansas, his major professor at Iowa State, Henry Gilman, who was already working on the Manhattan Project, assigned Massie to his research team. Massie performed his research at Iowa State University from 1942 to 1946 where he helped in the development of uranium isotopes for the atomic bomb.

In 1946 Massie completed his doctorate in organic chemistry at Iowa State University and accepted a one year position at Fisk before becoming a member of the faculty at Langston University in Oklahoma. While there he worked to transform his department and by 1953, he was not only a full professor and chair of his department, but also president of the Oklahoma Academy of Science. Massie was the first African American to hold this distinguished post. In 1953 he returned to Fisk. While at Fisk, he convinced the American Chemical Society to hold their national meeting at the university. This was the first time a historically black institution had ever hosted a major scientific meeting.

By the early 1960s Massie had held leadership positions at the National Science Foundation in Washington, D.C. and at Howard University. From 1962 to 1966 Massie was President of North Carolina College at Durham. In 1966, President Lyndon Johnson appointed Massie to the Naval Academy in Annapolis, Maryland where he became the first African American professor at the institution. He engaged in some of the most significant work of his career while at the Naval Academy. Massie also created the Academy’s black studies program. He retired from the Academy in 1993.

Samuel Proctor Massie is noted for his work on drugs to combat cancer, mental diseases, malaria, meningitis, and herpes.  He received a patent for work he did combating gonorrhea.

In 1947 Massie married Gloria Bell Thompkins whom he had met while they were students at Fisk University. She later became a psychology professor. The couple had three sons. Massie was also a member of Kappa Alpha Psi and Sigma Pi Phi fraternities.

In 1998, Massie was named one of the 75 greatest chemists of all time, alongside Marie Curie, George Washington Carver, Linus Pauling, and DNA pioneers James Watson and Francis Crick, by the journal Chemical and Engineering News.