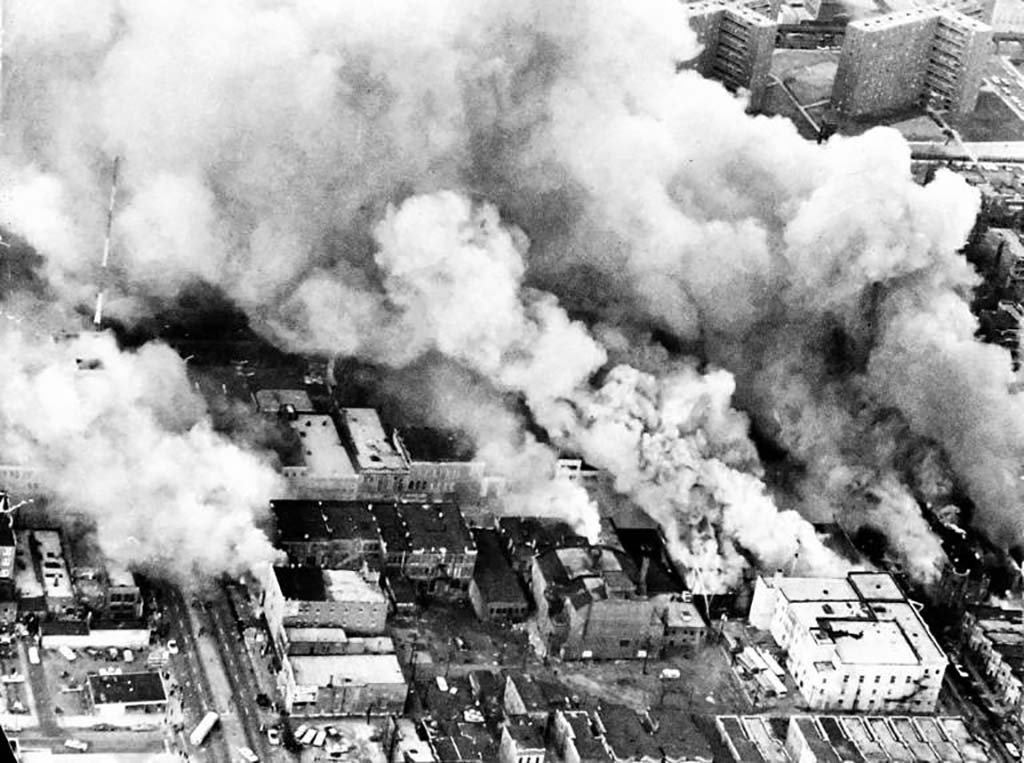 Burning Buildings on Chicago’s West Side, April 5, 1968
Fair use image

The King Assassination Riots were a series of more than 100 cases of civil unrest that occurred in the wake of the death of Dr. Martin Luther King Jr. This turmoil was apparent all throughout the nation as racial tensions rose to a volatile level. Different degrees of unrest were seen depending on the city in which it took place.

On April 4, 1968, civil rights leader Martin Luther King Jr. was assassinated in Memphis, Tennessee. The news of his assassination led to an outpouring of different emotions from blacks around the United States. The assassination was also a catalyst for civil unrest and many took to the streets to express their grief and anger in the forms of marches and protests. Not all of these demonstrations remained peaceful and in some of instances turned violent. Some of the most notable riots occurred in Baltimore (Maryland), Chicago (Illinois), Louisville (Kentucky), New York City (New York), and Washington, D.C.

The unrest in Baltimore came into motion on Friday, the day after King’s assassination, but tensions had been building beforehand due to frustrations in the black community. Thousands of National Guard troops, 500 Maryland police, and numerous federal troops were brought to the city in response to the events taking place. The riot resulted in more than 4,000 arrests and over a thousand business had been burned or looted. $13.5 million in damage was sustained in the city.

In Chicago riots also began on Friday, April 5, and occurred primarily on the city’s West Side. The scene in Chicago was characterized by looting, arson, and violence. Three thousand Illinois National Guard troops were ordered into the city to help police and Cook County Sheriff’s Deputies keep the peace. The unrest in Chicago led to eleven deaths and over a hundred destroyed buildings.

The events in Louisville took place in May and were instigated in part by King’s assassination but also by the fact that a white officer involved in the beating of a black man was reinstated by the police department after a brief investigation. Numerous troops of the Kentucky National Guard tried to quell the violence taking place in Louisville. Over 400 arrests were made and $200,000 in damages were a result of what had happened.

Although damage, looting, and violence did occur in New York City; it was largely avoided in part to the actions of the city’s mayor, John Lindsay. Mayor Lindsay went into Harlem and interacted with its residents and calmed the people by saying he was sorry about what happened to Dr. King.

In Washington D.C., the riots began on the same day Dr. King was assassinated. The unrest in the nation’s capital led to over 1,000 buildings being burned and $27 million in damages. Numerous National Guard troops and Marines were called into D.C. to help maintain order.

President Lyndon B. Johnson condemned the assassination of Dr. King and initiated a series of legislative acts which many in the White House believed would improve conditions for African Americans in the inner cities. The Fair Housing Act passed by Congress on April 11, 1968 was one such measure.  Congress, however, rejected the rest of Johnson’s proposals believing the president did not do enough to suppress the urban violence.

The King assassination riots had added to the already numerous riots that occurred in the 1960s such as the Watts riotof Los Angeles, California in 1965. King’s death was superimposed upon other racial issues already facing many cities and to many blacks seemed the rejection of his non-violent approach to racial reform. The damage in the wake of King’s death, however, also damaged many city’s economies and as a result thousands of jobs were lost, crime increased, property values decreased and most black communities were even more isolated from the rest of their cities than before the violence.