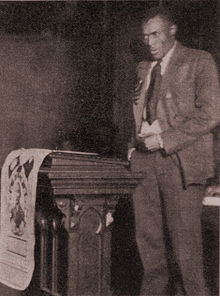 Lovett Huey Fort-Whiteman was an American political and civil rights activistand member of the Communist International.  He is regarded as the first American-born black Communist and first African American to attend a Comintern training school in the Soviet Union.  Fort-Whiteman organized the Communist Party-affiliated American Negro Labor Congress and was labeled by Time magazine as “the reddest of the blacks.”

Fort-Whiteman was born in Dallas, Texas in December of 1889 to Moses Whiteman, an ex-slave, and Elizabeth Fort. The couple had two children, Lovett and his younger sister, Hazel.  Fort-Whiteman attended Booker T. Washington High School in Dallas. After graduating from high school, Fort-Whiteman attended Tuskegee Institute in Alabama and after graduating, studied medicine at Meharry Medical College in Nashville, Tennessee. He did not complete his studies.  By 1910, he moved with his widowed mother and sister to Harlem, New York.

Soon after arriving in Harlem, Fort-Whiteman moved to the Yucatán peninsula in Mexico and worked as an accounting clerk.  Inspired by the Mexican Revolution, Fort-Whiteman joined the anarcho-syndicalist Casa del Obrero Mudial (House of the World Worker or COM).  After the COM was abolished, Fort-Whiteman left Mexico, eventually reaching Montreal, Canada where he discreetly made his way back to New York City.

In New York, Fort-Whiteman became affiliated with socialists A. Philip Randolph and Chandler Owen.  He enrolled at the Rand School of Social Science operated by the Socialist Party of America and joined the socialist party.  In 1919, Fort-Whiteman joined the Communist Labor Party of America and was jailed for explicitly advocating “resistance to the United States,” a violation of the Espionage Act.

In 1924, Fort-Whiteman, now a member of the Workers Party of America (WPA), was one of 250 delegates to the “Negro Sanhedrin,” a convention focused on the needs of the black working class in Chicago, Illinois.  Afterwards he traveled to Moscow, USSR to attend the Third International.  While in Moscow, Fort-Whiteman attended the Communist University of Toilers of the East (KUTV) and married a Russian woman. Upon his return to the United States in 1925, Fort-Whiteman established the American Negro Labor Congress (ANLC), replacing the African Blood Brotherhood as the official black communist organization in the US.

In 1928, due to philosophical differences over Communist policy for recruiting African Americans in the South, Fort-Whiteman lost his ANLC leadership position and was ordered to remain in Moscow.  By 1933 Fort-Whiteman asked to return to the United States but was denied.  In 1935 Fort-Whiteman was the subject of investigation by the Comitern, the world-wide leadership organization for Communist Parties.  He was accused of “misleading some of the Negro comrades,” and worse, for being a “Trotskyist.”   On July 1, 1937 the Soviet government tried him and sentenced him to five years in internal exile for “anti-Soviet agitation.”  Fort-Whiteman was transferred to Sevostlag Prison Labor Camp in northeastern Siberia where he died on January 13, 1939 at the age of 49.