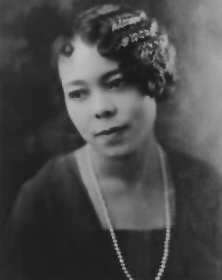 Vivian Osborne Marsh was a community activist and government official, becoming one of the most influential African Americans in the San Francisco area.  She was born in Houston, Texas, on September 5, 1897.  When she applied to the University of California Berkeley, because of her southern schooling she was required to take several entrance exams despite high grades.  Her excellent results on the entrance exams helped to discontinue this policy of discriminating against southern applicants.  She received both a Bachelor’s and Master’s Degree in Anthropology, becoming among the first African Americans to receive a master’s degree from UC-Berkeley.

While attending college, Marsh founded the Berkeley campus’ Kappa chapter of the Delta Sigma Theta sorority.  She went on to found several other chapters, and at times she served as president, Far West regional director, and national president.  Two major projects she organized were the Traveling Library, which provided books to rural portions of Georgia, and Teen Lift, which provided opportunities for underprivileged teenagers to visit events such as symphonies and operas.  She and her husband, Leon F. Marsh, Sr., were deeply involved in many fraternal organizations in California.  Marsh also was elected president of the California State Association of Colored Women which under her supervision established the Fannie Wall Children’s Home and Day Nursery in Oakland.  In addition, she was involved in the National Council of Negro Women where as a state supervisor of the National Youth Administration she helped to find employment for unemployed youths during the Depression.

Marsh was a Republican in a heavily Democratic area, and yet she still had considerable influence over both state and federal officials in her area.  Urged on by numerous supporters, she ran in 1959 for a city council position in Berkeley, but was defeated.  She remained involved in many community organizations, and on February 21, 1981, the mayor of Berkeley declared it to be Vivian Osborne Marsh Day.  During a convention in early 1986, she suffered a stroke, and passed away in March of that year, having spent her life working in the community.