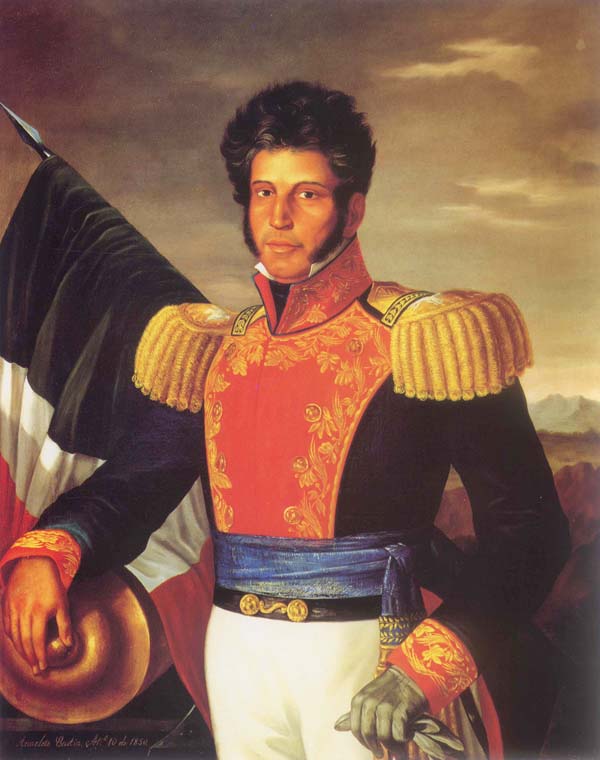 Vicente Guerrero was born in the small village of Tixla in the state of Guerrero.  His parents were Pedro Guerrero, an African Mexican and Guadalupe Saldana, an Indian. Vicente was of humble origins. In his youth he worked as a mule driver on his father’s mule run.  His travels took him to different parts of Mexico where he heard of the ideas of independence. Through one of these trips he met rebel General Jose Maria Morelos y Pavon. In November 1810, Guerrero decided to join Morelos. Upon the assassination of Morelos by the Spaniards, Guerrero became Commander in Chief. In that position he made a deal with Spanish General Agustin de Iturbide.

Iturbide joined the independence movement and agreed with Guerrero on a series of measures known as “El plan de Iguala.” This plan gave civil rights to Indians but not to African Mexicans. Guerrero refused to sign the plan unless equal rights were also given to African Mexicans and mulattos. Clause 12 was then incorporated into the plan. It read: “All inhabitants . . . without distinction of their European, African or Indian origins are citizens . . . with full freedom to pursue their livelihoods according to their merits and virtues.”

Subsequently, Guerrero served in a three person “Junta” that governed the then independent Mexico from 1823-24, until the election that brought into power the first president of Mexico Guadalupe Victoria.  Guerrero, as head of the “People’s Party,” called for public schools, land title reforms, and other programs of a liberal nature. Guerrero was elected the second president of Mexico in 1829. As president, Guerrero went on to champion the cause not only of the racially oppressed but also of the economically oppressed.

Guerrero formally abolished slavery on September 16, 1829. Shortly thereafter, he was betrayed by a group of reactionaries who drove him out of his house, captured and ultimately executed him. Guerrero’s political discourse was one of civil rights for all, but especially for African Mexicans.  Mexicans with hearts full of pride call him the “greatest man of color.”