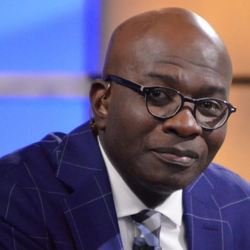 Armstrong Williams is an American conservative political figure and commentator. Williams hosts a daily radio show and a nationally syndicated TV show, The Right Side with Armstrong Williams. Outside of his political persona, Williams works in the private business sector as the CEO of the Graham Williams Group, an international public relations consulting firm. Armstrong Williams is also a published author of three books focusing on race issues, politics, and upward mobility, including Reawakening Virtues: Restoring What Makes America Great (2011). More recently, Williams has come to the attention of the public as an aide to GOP presidential candidate Ben Carson.

Williams was born on February 5, 1959, in Marion, South Carolina. He grew up one of ten children on a tobacco and swine farm. In 1981 Williams graduated from the University of South Carolina with a B.A. in Political Science and English. From the start of his professional life, Williams worked in both public relations and politics, a trend that has continued to this day. His early career included a stint as vice president of the public relations firm B&A Associates, presidential appointee to the U.S. Department of Agriculture, and legislative aide to South Carolina’s U.S. Senator Strom Thurmond.

In 2004 President George W. Bush appointed Williams to the Presidential Commission on White House Fellows. One year later, the media became aware that Williams was paid $240,000 to promote the No Child Left Behind Act on his television show as part of a wider effort to recruit black journalists to support the controversial legislation publicly. There was debate over the legality of this payment, and in September 2005, the Government Accountability Office concluded that the payments made to Williams were illegal.

Armstrong Williams has had a robust career in media, producing primetime specials with notable people such as poet Maya Angelou, Vice President Dick Cheney, and Israeli Prime Minister Benjamin Netanyahu. In 2003 Williams launched his own company, Right Side Productions, and between 2002–2005, Williams hosted the television show On Point With Armstrong Williams. In the world of radio broadcasting, Williams began his career in 1991 at WOL in Washington, D.C.  From AM broadcasting to Sirius XM, Williams has hosted, run, and been featured on a plethora of radio programs.

Dr. Ben Carson and Armstrong Williams have had a close relationship, with Williams serving on the National Board of the Carson Scholars fund. According to GQ Magazine, they first became friends when Williams had Carson on his television show in the early 1990s. Throughout the 2016 presidential campaign, Williams has been Carson’s unofficial political advisor, although he is formally known as Carson’s “business manager.” In November 2015, CNN reported that Carson had “cut ties” with Williams over an interview Williams gave to Bloomberg television that Carson did not believe accurately reflected his foreign policy credentials.