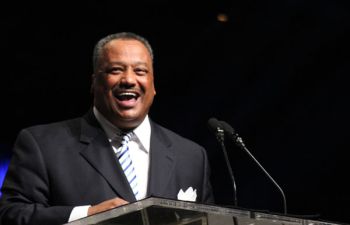 Fred Luter Jr., the first African American First Vice President and President of the Southern Baptist Convention (SBC), was born on November 11, 1956.  Luter and his four siblings were raised in New Orleans, Louisiana’s Lower 9th Ward by his mother, Viola Brooks, who worked as a seamstress and a surgical scrub assistant.

Luter began his road to becoming Southern Baptist Convention’s president in 1977 with a motorcycle crash at age 21.  He had a compound fracture in his left leg and a serious head injury.  The experience led Luter to commit himself to God.  He began preaching on Saturdays at the corner of Galvez and Caffin Avenue in the Lower 9th Ward while also working as a commodities clerk.  Armed with his “half-mile hailer” megaphone, Luter developed his fast-talking, easygoing style as a way of catching the attention of passersby.

Luter grew Franklin Avenue Baptist Church to over 300 members by 1989.  His wife, Elizabeth Luter, led the women’s ministry.  By 1994 Luter was so successful that Franklin Avenue Baptist began plans to build a larger church.  In 1995, Luter helped draft a resolution at the 150th annual Southern Baptist Convention meeting that committed the congregations to eradicating racism and repudiating slavery.  This was a significant change in policy since the SBC had originally formed in 1845 when it split with its northern counterpart over the issue of slavery.  In 2001, Luter was the first African American to deliver the keynote sermon at the Southern Baptist Convention’s annual meeting.

Fred Jr. and Elizabeth Luter have been married for 32 years.  They have two children: Fred “Chip” Luter III, a pastor, and Kimberly Luter.