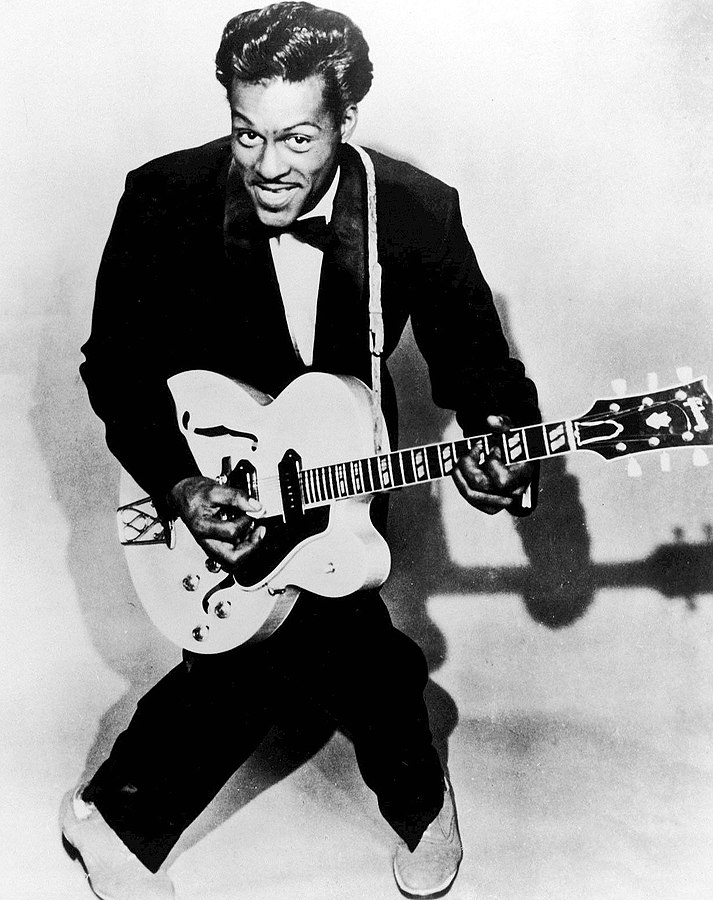 Guitarist, singer, and songwriter Charles Edward Anderson “Chuck” Berry was considered a pioneer of rock and roll and a major influence on 20th century popular music. His songs such as “Johnny B. Goode” and “Roll Over Beethoven” are rock and roll standards.

Chuck Berry was born in St. Louis, Missouri on October 18, 1926 to a middle class family which included six siblings.  His father Henry worked in a flour mill and his mother Martha was a college graduate.  Chuck’s mother played piano and both she and his father were church singers instilling in their son an early interest in music.

Despite his middle class family background, Berry as a teenager joined two high school friends in committing a short string of armed robberies in Kansas City, Missouri.  They were arrested and Berry was convicted and served three years in prison between 1944 and 1947.

Shortly after he was released Berry married Themetta Suggs. The couple had two children and Berry settled into family life while working at an automobile assembly plant in St. Louis and taking jobs as a carpenter with his father. In his free time Berry finally pursued an early fascination with guitar, taking lessons from Ira Harris, a local jazz guitarist.

By 1952 Berry was playing professional engagements in St. Louis clubs and eventually joined the St. John’s Trio, led by pianist Johnnie Johnson and including drummer Eddy Hardy.  Berry incorporated elements of country into the trio’s sound but he also brought in blues songs, turning the trio into a prototype rock and roll band.

In 1955 Berry traveled to Chicago, Illinois where he had a chance meeting with Muddy Waters and asked him for advice about getting to record. Waters sent him to see Leonard Chess at Chess Records who listened to Berry’s home recording of “Ida Mae,” a popular country tune. Chess immediately offered a recording session and on May 21, 1955 Chuck Berry recorded “Ida Mae” with reworked lyrics and a new title, “Maybelline.”  Berry’s first recording, “Maybelline,” reached #1 on the Billboard R&B chart and sold over one million copies. By the late 1950s Berry was an established star with several hit records, film appearances, and a profitable touring schedule. In 1962, however, his career was derailed when Berry was convicted of violating the Mann Act for allegedly transporting an underage girl across state lines for immoral purposes, a charge that Berry still disputes.

After his release in 1963 Berry had a string of hits though none reached the popularity of his earlier recordings.  By the 1970s he was primarily in demand for rock and roll revival shows where he played his past hits. In 1972 his live recording of the novelty pop song “My Ding-A-Ling” became his only #1 single on the U.S. pop charts.  He continued touring but in 1979 his insistence on being paid in cash led to a third jail sentence of four months for tax evasion.

In 1986 Berry became one of the first musicians to be inducted into The Rock and Roll Hall of Fame.  He is also listed as 5th in Rolling Stone magazine’s 2004 list of The Greatest Artists of All Time and 7th on the list of Rolling Stone’s 100 Greatest Guitarists.  Another unique honor:  “Johnny B. Goode” was included with the golden records launched with NASA’s Voyager 1 and 2 space probes.