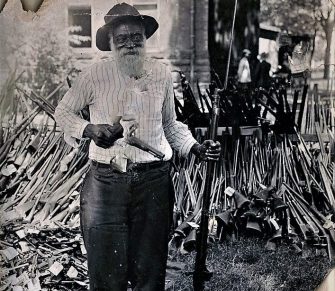 The Longview Race Riot occurred on July 10-12 in this northeast Texas city where 1,790 blacks comprised 31% of the town’s 5,700 people in 1919. Racial tensions were high across the United States due to race riots that began in March 1919. Just before the Longview Riot, local teacher and newspaper correspondent Samuel L. Jones and Dr. Calvin P. Davis, prominent leaders of the black community, had begun encouraging local black farmers to avoid selling to local white cotton brokers and to instead sell directly to buyers in Galveston. Also, local blacks set up a cooperative store where they competed with and angered local white merchants. These incidents raised tensions in Longview long before the riot occurred.

In early June, a local black man, Lemuel Walters, was beaten by two white men for allegedly making romantic advances towards their sister, a white woman from Kilgore. Walters was arrested and put in the Gregg County jail, but a mob showed up at the jail on June 17, and the sheriff gave Walters to the mob, who shot and killed him. The story was printed in the Chicago Defender on July 10 and enraged local whites who blamed the article on Jones although he denied writing it.

Later that day Jones was attacked and beaten across the street from the Gregg County courthouse by the same men who beat Walters. Dr. Davis arrived in his vehicle and took Jones to his office to treat him. The two men appealed to Mayor Gabriel A. Bodenheim for protection but were instead advised to leave town. Jones hid with relatives and they gathered twenty-five friends to protect his home. Around midnight, a group of white men arrived at Jones house but were met with gunfire. Three of the white men were injured, and another who hid under a nearby house was beaten badly by the black defenders of the home.

As the word spread, a crowd of almost 1,000 whites began to gather back in town with some breaking into Welch’s Hardware Store to take guns and ammunition. The crowd burned down Jones’s home, Dr. Davis’s home and office, and a black dance hall. Although Texas governor William P. Hobby sent eight Texas Rangers to Longview, the violence continued. On the night of July 12, Marion Bush, father-in-law of Dr. Davis, was killed by a local white farmer. On Sunday, July 13, Governor Hobby declared martial law in all of Gregg County, and ordered all residents of Longview to surrender their weapons at the county courthouse. An estimated 5,000 to 7,000 weapons were turned in, and more soldiers and Rangers arrived in town to quell the riots.