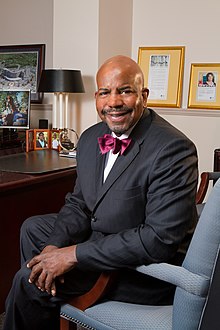 Dr. Laurencin is world-renowned in regenerative engineering, a field he has pioneered, as well as in biomaterials, stem cell science, nanotechnology, and drug delivery systems. He and his colleagues were the first to develop nanofiber technologies for tissue regeneration and the development and understanding of polymer-cermaic systems for bone regeneration. He invented the Laurencin-Cooper ligament for ACL regeneration, and engineered grafts for shoulder rotator cuff tendon repair and regeneration. Dr. Laurencin has authored over five hundred scientific papers, and is Editor-In-Chief of the journal Regenerative Engineering and Translated Medicine.

The list of awards for Dr. Laurencin’s work is long and detailed. He is the first individual in history to receive both the highest and oldest awards from the National Academy of Medicine (the Walsh McDermott Medal), and the National Academy of Engineers (the Simon Ramo Founder’s Award). In science, Dr. Laurencin received the highest honor of the American Association for the Advancement of Science (The Philip Hague Abelson Prize), and in innovation, he was awarded highest honor in the United States for technological advancement, the National Medal of Technology and Innovation, by President Obama.

Dr. Laurencin has served as the Commissioner of Boxing for the State of Connecticut, and previously as a ringside boxing physician for professional boxing in New Jersey, Pennsylvania, and Connecticut. He has also been a physician for the USA Boxing Elite Men’s Team and serves on the National Medical Advisory Board for USA Boxing. Dr. Laurencin has been funded by the National Science Foundation, the National Institutes of Health, and the Department of Defense for several decades. The Society for Biomaterials established the Cato T. Laurencin, M.D., PhD Travel Fellowship Award, and the W. Montague Cobb/ NMA Institute and the National Medical Association established the Cato T. Laurencin Lifetime Research Achievement Award in his honor. He is a member of numerous international societies including the Indian National Academy of Sciences and an elected Fellow of the African Academy of Science, the World Academy of Sciences, and a Foreign Member of the Chinese Academy of Engineering.