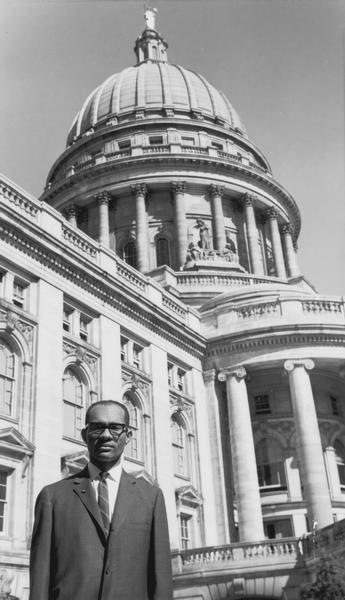 Attorney Lloyd Augustus Barbee was born August 17, 1925 in Memphis, Tennessee.  He was the youngest of three brothers from Earnest A. Barbee and Adelina Jenkins Gilliam, both from Mississippi.  Barbee attended LeMoyne College in Memphis and later went to law school at the University of Wisconsin in Madison, where he met his wife, Roudaba Bunting.  They married in 1954 and later divorced in 1959.  He graduated from Law School in 1956.   While in law school, he became President of Madison NAACP branch, where he fought for fair housing and led protests against racism. After obtaining his law degree, he worked as an attorney for the Wisconsin State Department of Labor. He later entered private practice and sued the State of Wisconsin for discrimination in housing.  In 1964, he successfully won the first housing discrimination case before the Wisconsin Supreme Court, Gregory III v. Madison Mobile Homes Park.

Barbee moved to Milwaukee in 1959 to practice law and ran successfully as State Representative for the 6th District in 1964.  From 1965 through 1977 Assemblyman Barbee was the only African American in the Wisconsin State Legislature.  There, he produced an impressive legislative record.  He sponsored the Fair Housing Act, several employment and public accommodation Civil Rights Acts, legalization of abortion, reparations to African Americans and Native Americans, and a bill mandating that Black History and multicultural history be taught in the state’s public schools. Barbee wrote articles called “Comments,” which were featured in the African American newspapers across the nation including the Black Panther Party newspaper.

In 1967 Barbee represented comedian and civil rights activist Dick Gregory, when he was arrested and charged with “disorderly conduct” while participating in a civil rights march in Milwaukee.  Throughout the 1960s Barbee led boycotts against the segregated Milwaukee public schools.  In 1972 he won a major  civil rights lawsuit, Amos v. Armstrong, against the Milwaukee School Board in Federal District Court, which resulted in Milwaukee becoming one of the first major Northern cities under court order to integrate its public schools.

In 1968 Barbee represented African American students at the University of Wisconsin, Oshkosh, who protested to get black history courses taught only to be dismissed by the University administration for their actions.  Barbee obtained a court order allowing their readmission on the grounds that their due process rights had been violated by the university.

Barbee also taught at the University of Wisconsin, Milwaukee in the Africology Department from 1978 – 2000.  In 2001 he was awarded an honorary doctorate degree in Sociology from the University and created the Lloyd A. Barbee scholarship in his honor.

Lloyd A. Barbee died on December 29, 2002 in Milwaukee.  He was 77.  A Milwaukee Street is named in his honor, as is the Lloyd A. Barbee Montessori School in that city.  His statue is also in the Wisconsin State Historical Museum in Madison, Wisconsin.  He is survived by his children, Finn Barbee, Daphne E. Barbee-Wooten, and Rustam Barbee.