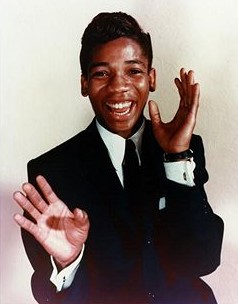 Little Willie John, born William Edward John on November 15th, 1937, was one of ten children born in Cullendale, Arkansas to Mertis John and mother Lillie John. His family migrated north to Detroit, Michigan in the 1940s so his father could find work. Little Willie John was a musically gifted child who performed in gospel groups and talents shows.  In 1950 he would form his own group, The United Four, composed of his siblings, notably Mable John.

Little Willie John would be noticed first by agent Henry Glover who would sign him to King Records in Cincinnati, Ohio in 1955. The first recording by John was a recreation of “All Around the World” released earlier in 1955 by Titus Turner.  John’s version however would hit No. 5 on the R&B charts. He followed up with “Need Your Love So Bad” in the same year and his number one song “Fever” released a year later (1956) would sell over one million copies and top both the R&B and Billboard pop charts. John again reached the reached the five spot on the pop charts with “Talk to Me, Talk to Me” in 1958 and would continue to release hits throughout the early 1960s. Over a ten year period he placed 14 songs on the Billboard top 100 chart in his short career.

John’s career declined almost as rapidly as it rose.  In 1963 he was dropped by King Records because of his abuse of alcohol. In 1964 he assaulted a man with a glass bottle in a Miami, Florida nightclub and then skipped bail and fled to the Pacific Northwest. Performing in Seattle, Washington later that year, extremely intoxicated Little Willie John partied throughout the night and, in a brawl outside a bar, a 6’2” ex-convict punched the 5’4” singer in the mouth and he responded by stabbing the man to death. The singer was initially charged with murder but after examining the evidence he was arrested and later tried and convicted for manslaughter. Little Willie John appealed his verdict but by July 6, 1966 he began serving time at the state penitentiary in Walla Walla, Washington. In total John would only serve a year and 10 months of his 8-20 year sentence.

During his time at Walla Walla, John got in several more scuffles, made music, performed, and received the brute end of the treatment from the guards. Shortly after beginning his sentence, John died in the Walla Walla penitentiary from a heart attack on May 26, 1968. William Edgar John would only live 30 years before his death. In wake of his death, James Brown released an album titled Thinking About Willie John and a Few Nice Things in 1968.

Although Little Willie John made music for less than a decade he influence numerous other artists including Fleetwood Mac’s cover of “Need Your Love So Bad”, and the Beatles’ cover of “Leave My Kitten Alone”. John was posthumously inducted into the Rock and Roll Hall of Fame in 1996 and then the R&B Hall of Fame in  August of 2014.