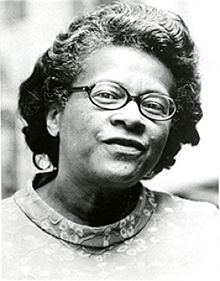 Letitia Woods Brown, historian, academician, public scholar and community activist was born on October 24, 1915 in Tuskegee, Alabama. She was the middle child of Tuskegee Institute instructors Matthew and Evadne Woods. In 1935, Letitia Woods completed a Bachelor of Science degree at Tuskegee.  After a brief stint as a teacher in Macon County, where the dreadful conditions of the rural black school greatly impacted her, she entered Ohio State University, completing a Master of Arts degree in History in 1937.

While at Ohio State, Woods Brown participated in sit-ins against white-only restaurants organized by the NAACP Youth Council. She also faced racism on a personal level when her academic counselor at Ohio State questioned whether she as a black woman had the intellectual capacity to complete a graduate degree.  In 1938, a year after her graduation, Woods Brown visited Haiti to study Caribbean history and literature alongside a group from Ohio State.  She added that she took the trip to fulfill a desire to “get outside of the United States to breathe free air.”

In 1945, Woods Brown began work on her Ph.D. in History at Harvard University, completing the degree 21 years later in 1966.  She was the first black woman to earn a Ph.D. in history at Harvard.  There she met Theodore E. Brown, an economics Ph.D. student from Harlem, New York, whom she married in 1947.

Woods Brown distinguished career as a college educator started in the late 1930s when she became a history instructor at Tuskegee and then at LeMoyne-Owen College in Memphis, Tennessee from 1940 to 1945.  After moving from New York to Washington, D.C. she taught at Howard University in the late 1960s, and in 1968 went to Australia as a senior Fulbright lecturer for two of their most prestigious universities, Monash and Australia National University.

Letitia Woods Brown’s Ph.D. dissertation was published by Oxford University Press in 1972, under the title Free Negroes in the District of Columbia, 1790–1846 and was a pioneering study of the urban history of African Americans in the nation’s capital. A meticulous work of research, Free Negroes unearthed the impressive volume of litigation initiated by slaves to establish their claims to freedom in the District of Columbia.

From 1971 until her passing in 1976 in Washington D.C. at the age of 60, Dr. Woods Brown was a professor of history and American civilization at George Washington University.  While there, she was the only full-time Black faculty member. During this same time period, Woods Brown was a decisive force in the preservation of sites associated with African American history, as a member of the Committee on Landmarks of the National Capital.