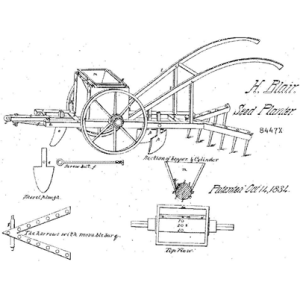 Henry Blair was an African-American inventor who, in 1834, became only the second black man to receive a United States patent for his mechanical corn planter. For years Blair was believed to be the first African American to receive a patent, but it was later discovered that Thomas Jennings received a patent in 1821 for his creation of the dry-cleaning process. Blair is most renowned for his inventions of the corn planter and a mechanical cotton planter. Blair’s inventions improved the productivity of corn and cotton agriculture.

Blair was born in Glen Ross, Maryland in 1807. There is scant information regarding his early life or family background. However, Blair appears to have never been enslaved, due to his patent eligibility (enslaved people could not register patents with the United States government).  Blair managed his own independent business as a commercial farmer near Glen Ross although he was unable to read or write. It is also worth noting that Henry Blair is the only inventor denoted as a “colored man” in the records of the US Patent Office.

After finding success as a farmer, Blair proved himself a capable inventor. On October 14, 1834, Blair received his patent for his mechanical corn seed planter. Blair’s corn planter resembles a wheelbarrow with a chamber fixed to the bottom that disperses the seed. After the seed is dispersed, rakes attached to the back of the wheelbarrow drag over the seed to cover them with soil. Blair’s corn planter resulted in more efficient crop planting and resulted in greater overall yield for farmers. According to an 1836 article from The Mechanics’ Magazine, Blair’s invention was conjectured to “save the labor of eight men.”

On August 31, 1836, Blair obtained a patent for his mechanical cotton planter. The device is essentially an adaptation of Blair’s corn planter optimized for cotton. The cotton planter also resembled a wheelbarrow, but it had two blades that split the earth while a cylinder located behind the blades dispersed the seeds in to the freshly ploughed grooves.

Henry Blair died in Maryland in 1860 of unknown causes.