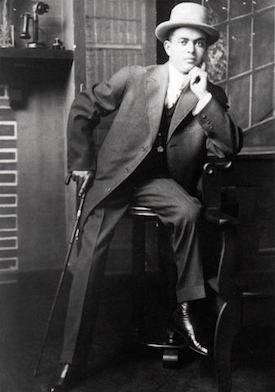 The Knoxville Race Riot in Knoxville, Tennessee, was one of several race riots that took place in the “Red Summer” of 1919. The so-called “Red Summer” of 1919 was a series of violent riots, predominantly whites against blacks, which lasted from May until October of that year and resulted in an estimated six hundred deaths across the nation.

The riot began on August 30, 1919, when an intruder entered the home of Bertie Lindsey, a twenty-seven-year-old white woman, and shot her while she was asleep in her bed. The only witness was Lindsey’s twenty-one-year-old cousin, Ora Smyth, who soon after the intruder left their Knoxville home, stealing a purse on his way out, ran next door to the house of a city policeman. One of the officers investigating the crime scene, Andy White, immediately accused Maurice Mays.

On August 30 at 3:30 a.m., Andy White along with two other officers traveled to Mays’s apartment where they found a revolver in his dresser. Soon after, White handcuffed Mays and hauled him over to the crime scene where Ora Smyth “identified” him as the intruder after barely glancing at Mays. Maurice Franklin Mays was then taken to the Knox County jailhouse.

At around 8:00 a.m. the next morning, angry whites began to congregate near the Knox County Jail. A few individuals broke into the jail in search for Mays; however, he was moved to a jail located in Chattanooga, Tennessee, as a protective measure. No African American inmates were harmed during their search, but over a dozen white inmates were freed, leading to the pillaging of the liquor storage room and the demolition of the jail.

Later that day, the National Guardsmen were notified about several holdups taking place in the black section of Knoxville, near Vine Avenue and Central Street, by a band of African Americans. Not long after, a detachment was sent to the scene, followed by a mob of white rioters. Although only one business was broken into by African Americans, the white mob raided and destroyed numerous black-owned businesses in the area. Eventually, guardsmen joined the mob, engaging in gunfire with black residents. In the end, hundreds of citizens were wounded and seven people were killed—six blacks and one white. The riot prompted many African Americans to flee the city.

Although the Knoxville riot of 1919 started as a murder case and not a race riot, in the end, it became one. Maurice Franklin Mays was convicted of the murder of Bertie Lindsey by an all-white jury and sentenced to death. On March 15, 1922, in Nashville, Tennessee, Maurice Franklin Mays was pronounced dead after being sentenced to the electric chair. He was thirty-five years old.