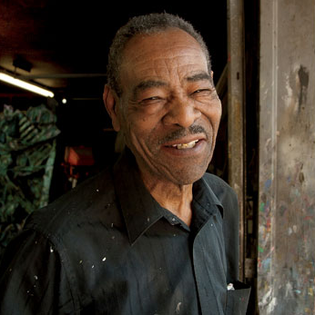 Thornton Dial, a native Alabamian, was an artist and sculptor famous for yard show-influenced, mixed media pieces that used discarded everyday objects to symbolize the history and experience of African Americans in the South. While he did not belong to any formal school of art, Dial is widely considered to be one of the most important voices in the outsider art movement.

Thornton Dial was born on September 10, 1928 on a cotton plantation near Emelle, Alabama. His mother, Mattie Bell, was an unwed teenager at the time and asked her grandmother to raise her child. Dial lived with his great-grandmother on the sharecropper farm of his cousin, Buddy Jake Dial, and took his last name. Dial recalls that he spent more time working on the farm than attending school: “They told me, ‘Learn to figure out your money and write your name. That’s as far as a Negro can go.’” At age 12, Thornton Dial dropped out of school. Even though he had made it through third grade, he could not read or write.

Soon after, Dial moved to live with family in Bessemer, Alabama and after working a series of odd-jobs, found steady employment as a metalworker at the Pullman Standard Plant. While Dial never received any formal training in art or sculpture, the skills he learned as a metalworker and handyman served as a foundation for his artistic techniques. As a hobby and side job, Dial picked up cast-off objects and used them as materials to make what he just called “things,”practical and decorative items to sell around the neighborhood. When the Pullman Standard Plant closed in 1981, Dial devoted his time to creating more and more sophisticated “things,” producing them and, in his own words, “putting them out there for someone to like.”

Dial’s art caught the attention of Lonnie Holley, a black folk-artist who, like Dial, mostly made art and sculptures from found objects. In 1987, Holley introduced Dial’s work to William Arnett, an Atlanta, Georgia-based art collector with a special interest in the self-taught black artists of the South. For the first time in his life, 59-year-old Dial and his work became a centerpiece of Arnett’s Souls Grown Deep Foundation. From there Dial’s artwork made its way first into local museum and gallery exhibits and then into renowned museums across the United States. Only at that point did Dial consider his “things” to be works of art.

Many of Dial’s most famous works make use of both the origin and positioning of found objects to provide commentary on black life in the South, history, society, or current events. His “Last Day of Martin Luther King” (1993) depicts King as a tiger — Dial’s symbol for the strength of black people — made of mop strings. His sculpture “Lost Cows” (2001) was made from the bones of cattle Dial himself owned.

A selection of Dial’s artwork can be found here.